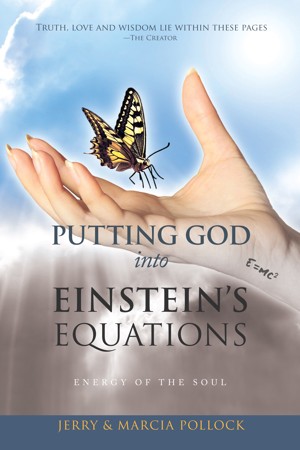 Putting God Into Einstein's Equations: Energy of the Soul

By Jerry Pollock
Putting God into Einstein’s Equations: Energy of the Soul is a merger between God’s spiritual world and Einstein’s energy physics that helps us dissect the mysteries of God, ourselves and our universe. The book represents an unusual and unique collaboration by soul mates Marcia and Jerry Pollock across two worlds, the spiritual and the physical, via thought-energy direct telepathic communication. More
God is energy and so is our Divine soul. Each of us receives a tiny "piece" of God's virtually infinite energy, and the difference between our energy and that of God is simply the enormous difference in order of magnitude when comparing God's energy to ours. The behavior of this energy mirrors the equations brilliantly originated and described by Albert Einstein with two exceptions -- the mass, m referenced in Einstein's famous equation, E=mc2, is a special Mass, M, originating in God's energy particles, and God’s and our soul energy travels at one million times the speed of light, c. In fact, this Mass is the source of the independent intelligence and sensory properties found in the soul of all human brains. The incredible speed that our souls travel allows our souls to live for the eternity even though our bodies die during many past lives, since time stands still at such speeds. Putting God Into Einstein's Equations: Energy of the Soul is a provocative and compelling book that weaves together empirical, scientific observation, academic research, and theoretical and theological considerations, bolstered by revelatory, first-hand testimony bearing witness to the existence of the Divine soul in both the physical and spirit worlds.

The book is the direct outcome of an unusual and unique collaboration by soul mates Marcia and Jerry Pollock spanning the spiritual and physical worlds. Marcia is deceased, and her contributions come from the powerful intelligent energy of her Divine soul, which is without her physical body in the spirit world. Jerry is alive with his Divine soul, which is constrained within his physical body on planet Earth. Communicating through telepathy, the authors have written this exquisitely, simply explained book in their humble attempt of gratitude to bring new knowledge to the understanding of God's Essence and our world.

Contained in the pages of Putting God Into Einstein's Equations are moving, personal reflections on the authors’ life experiences, from the thrill of discovering one’s true soul mate to both traumatic and joyous events like a descent into bipolar depression, Divine miracles, and the pain and loss associated with the death of a loved one. Equally explored and discussed are practical techniques for hypnotic-spiritual world regression and directing spiritual energy and using light to alleviate negative forces. Above all else, Putting God Into Einstein's Equations seeks to advance an awareness and comprehension of God, drawing upon points of reference as diverse as Qigong and yoga to the word of rabbinical scholars.

Life may have a destiny for us all. Dr. Jerry Pollock's destiny seems to have changed from being a research scientist of forty years to becoming a spiritual writer of the arts. Jerry's first book, Divinely Inspired: Spiritual Awakening of a Soul, was a memoir published in 2003 with a second edition published in January 2009 and a companion audio book just out in 2010. His second book, also published in January 2009, was a biblical fiction novel, Messiah Interviews: Belonging to God, which is also available as an audio book. His stage play, Code Name Daniel, premiered in Manhattan at the American Theatre of Actors from July 7th thru July 11th. He is currently writing a biblical thriller fantasy suspense, Gog & Magog: The Devil’s Descendants due out in May of 2011.

Dr. Pollock was born Jewish in 1941 in Toronto. He didn't know what it meant to be spiritual until God entered and changed his life at the age of 57. He is now 69. Despite onset adult Bipolar Disorder and growing up neurotic in an unloving and non-nurturing home environment, Jerry succeeded in academics. He has a Masters degree in Pharmacy, a Ph.D. in Biophysics from Israel, and further training in Microbiology. He is the author of seventy-five scientific publications, and is Professor Emeritus at Stony Brook University on Long Island. For the past ten years, he has embarked on a path to gain spiritual wisdom and share it with others. He is married to Marcia, his bashert or destined one. They reside in Florida.

You have subscribed to alerts for Jerry Pollock.

You have been added to Jerry Pollock's favorite list.

You can also sign-up to receive email notifications whenever Jerry Pollock releases a new book.