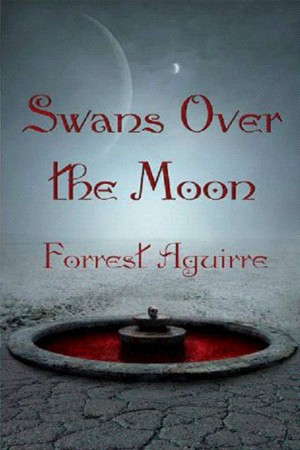 Swans Over the Moon

The Judicar was pensive. “Who say men that I am, Heterodymus?” Heterodymus' shriveled, lich-like left head answered first: “Men say that you are mad, that you should vacate the throne and let the people rule over their own interests,” it croaked in a high, scratchy voice.
He nodded, thinking for a moment, then turned to the other head. “Dexter?” he asked, seemingly unaffected by the brashness of the left-head's comment.
The right head responded in a cool, reassuring voice whose cheerful tone contradicted the left head's as much as the godlike, innocent beauty of his own baby face opposed the other's extreme ugliness. “Sinistrum is mistaken. Men say that you are the greatest ruler Procellarium has ever known. A genius in trade and tactics, my lord.”
The Judicar weighed their words for a moment. “Madman or genius,” the noble spoke in a dignified manner, without a hint of boasting or over-confidence, “I am their leader. Judicar Parmour Pelevin. And I will uphold the traditions of my people.”

Forrest Aguirre's fiction has appeared in over fifty venues in both speculative and literary venues. His work has appeared in Asimov's, Postscripts, American Letters & Commentary, Gargoyle, Exquisite Corpse, and Apex Magazine, among many other magazines and anthologies. His work has received several honorable mentions in various Year's Best anthologies, and has been shortlisted for the StorySouth Million Writers Award. His first collection of short fiction, Fugue XXIX, is published by Raw Dog Screaming Press. Forrest is also a World Fantasy Award recipient and Philip K. Dick Award finalist for his editing of the Leviathan 3 anthology with co-editor Jeff VanderMeer. Forrest lives in Madison, Wisconsin.

Reviews of Swans Over the Moon by Forrest Aguirre

“Swans Over the Moon.” By Forrest Aguirre.
Intellectual, weird fiction for Fantasy readers; 5 stars
Summary (from Smashwords): “Judicar Parmour Pelevin rules the ancient kingdom of Procellarium on an environmentally decimated desert moon of a blue world. His stubborn insistence on establishing order, in the name of upholding ancient tradition, sets his own family’s swords against him. But is tradition strong enough to contain the chaos that erupts all around him and throughout his kingdom?”

Conflict and Design: Initially the ruler Judicar is embroiled in a “man vs alien conflict”, being pitted against a rebellious daughter and the aliens that she sympathizes with and leads. But the conflict is much deeper than simple “us vs. them.” The deadly struggle between “old-world vs. new-age” dominates since it permeates throughout the character design (i.e. the two-headed counselor Heterodymus sporting one baby-faced head and one lich-like, the insectile-Scaramouche dressed in top hats), the lunar milieu (the vividly different cultures of the chaotic Euler district vs. the lawful Procellarium), and the haunts of our protagonist Judicar (the “Doom of Change” rite and the laws of Procellarium are intimately connected to the deaths in his family).

Style: Aguirre writes with an entertaining, heavy narrative that reads like Shakespeare. Aguirre is a World Fantasy Award winner for his editorial work, with Jeff VanderMeer, on the Leviathan 3 anthology; with “Swans” he demonstrates his command for storytelling in addition to his command over language. Expect: (1) Haunting descriptions, (2) Brutal action, and (3) a touch of dark humor: His prose is best represented with excerpts:
1)Haunting Description
“She entered the room, gliding over the floor as if the ground itself retreated from her touch in recognition of her standing as the Judicar's daughter. Her waist-length ghost-white hair flowed only slightly behind her crimson robes. Above her floated two apparitions – Tarans, those wispy souls of un-baptized infants that are often seen flitting about in cemeteries or dark woods, bewailing in mewing voices their terrible fates. But these two were quite contented, continually re-arranging a series of red silk scarves around the maiden's head, shoulders, waist, and arms. She simultaneously swelled and retreated, like a beating heart, as she approached.”

2) Brutal Action
“His blunderbuss pistol discharged point blank into the Scaramouche's face, spattering mask, bone, and flesh in a mist of gore that coated his lap and right leg. He drew his rapier, slowly circling his horse to get a clear view of his surroundings above the fray, but the tourbillon was too great. He soon found himself in the midst of the enemy, completely surrounded.. His horse buckled beneath him, its armor punctured by dozens of enemy bayonets.”

3) Dark Humor “Their ignominious departure from Euler was the antithesis of their stately arrival. The Judicar and Heterodymus left without an escort to find their carriage besotted with feces, rotting eggs, and vegetables. They gathered their drunken pygmies, some by the nape of the neck, and hitched them to their posts. When the Judicar opened the door to the carriage, the severed head of his deputy rolled out.”

You have subscribed to alerts for Forrest Aguirre.

You have been added to Forrest Aguirre's favorite list.

You can also sign-up to receive email notifications whenever Forrest Aguirre releases a new book.