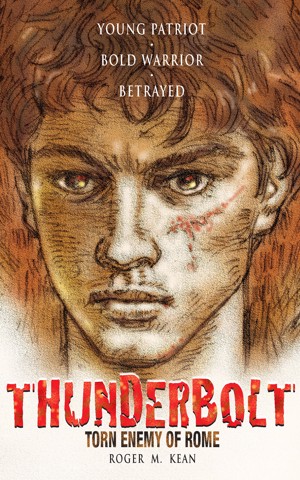 Rated 4.00/5 based on 2 reviews
When Hannibal leads his army across the Alps into Italy to bring Rome to its knees, young Malco—the Thunderbolt—is proud to take part. He battles corruption, bears, wolves, frostbite, and the massed tribes who would bar Hannibal’s path to glory. Through his eyes and the loves of his life, this violent tale unfolds across the rich tapestry of history, of political intrigue and brutal bloody war. More
219BC—Carthage locks horns with Rome in a bloody war for survival…

When Carthage’s charismatic general Hannibal launches his army on a daring campaign across Spain to Gaul and over the Alps into Italy to bring predatory Rome to its knees, his cousin, noble-born teenager Malco is proud to take part in the glorious endeavor.

From the heat of the Libyan desert to the passion of great love, Malco—the Thunderbolt—battles corrupt politics, bears, wolves, dread mountain passes, and the massed Celtic tribes who would bar Hannibal’s path to victory. Through his eyes and the loves of his life—Giskon, hotheaded activist; Juba, Numidian warrior; and Trebon, dearest and eternal friend—this violent tale unfolds across the rich tapestry of history, of political intrigue, and brutal bloody war.

Malco is indeed a bold warrior but he is also stunningly beautiful as the cover shows. At full size, Oliver Frey's masterpiece of cover art reveals a sparkle of fire and gold in the young soldier's eyes that shows his commitment to bravery and passion in both love and war. See larger size cover at:

http://recklessbooks.co.uk/#/thunderbolt/4566503250 and then click on the cover on the left to see a larger cover with Malco’s fiery eyes.

Roger Kean has created a most singularly captivating young man in our hero Malco and a spectacular adventure of a war within a war in this historical rare gem. Malco is the cousin of the one of the greatest militarily leaders in history, Hannibal (247-182 BC.)

Malco was well trained before becoming an officer in Hannibal’s army at age 20. It was said of young Malco while he was still in training,
“He handles a mean sword, swims like an otter, is a great endurance runner over distance, throws a javelin with unerring aim, and sends an arrow to the mark as well as the best Libyan archer.”
He also is a natural born leader who gains the respect of the soldiers under his command despite his youth."

While the book is an historical account of the Second Punic War (Roger Kean is the author of a plethora of non-fiction history books) His historical novel, Thunderbolt: Torn Enemy of Rome is also an account of Malco’s loves, particularly the love of his life, fellow soldier Trebon. He also forms a loving friendship with Juba, a Numidian tribesman who is a mercenary fighting with Hannibal’s troops. Juba is completely dedicated to his friend Malco but is not blind to Malco’s sometimes overeagerness in his fight against the Romans. Juba refers to Malco and says to Trebon, "He has a fondness for getting into trouble.”

Malco loves Trebon with all his heart but sometimes war preempts his passion. Juba tells Malco that Trebon has been wounded by an arrow in his arm and urges Malco to go see him. Malco responds,
"I can’t. I must get cleaned up and attend Hannibal with the other commanders.”

Juba sighed. “It’s said when he thought you lost in the Rhône he considered taking his own life for failing you.”

Malco steeled himself and glared at Juba. “He was ever for exaggeration.”
Malco of course does go see his beloved Trebon but only after reporting to his cousin and leader Hannibal.

Danger abounds in this adventurous tale of war. War is bloody and people die. Those who cannot accept the violence of battle scenes should avoid it and stick to romances where the only things that get wounded are feelings. Despite the uncertainty of combat there is no reason to fear for Malco’s life because he is the narrator of the novel. The story is being told by an elderly Malco entertaining his grandchildren. Yes he has children and they have children. Hannibal had no problem with Malco’s homosexuality so long as he carried on the tradition of family.

When Hannibal informs him of his duty to marry and procreate, Marco bristles saying:
...but you must never expect me to feel again for anyone as I loved Trebon.”

Hannibal’s smile faded a degree and his face took on a sterner expression.
Hannibal replies,
"Then you must learn to separate love and sex.”

As the war drags on the leaders of Carthage make excuses and do not send Hannibal the supplies he needs to carry out the war. Once Malco fought for the glory of Carthage. Now he fights to honor Hannibal and the sacrifices of his comrades fallen in battle. As it becomes clear that Carthage has abandoned Hannibal Malco feels so betrayed that he has no more love for Carthage than he has for Rome. The one who remains true to Malco is his beloved friend Juba. While Juba could return to Africa a rich man, he refuses to go anywhere except to be with Malco.

As for Malco:
But the warmth which moved his heart, which beat in the pulse and made life worth living... this came from Juba, the mutual release of their seed which transported him to the heavens.
Having fought against Rome and then been betrayed by Carthage Malco longs for a place where "it’s free and independent, where courage, manliness, and honor still count.” That sums up Malco well, independent, courageous, manly, and honorable. But he is also generous with his steadfast love and gives his heart wholly to the man he loves.

Thunderbolt: Torn Enemy of Rome is the best historical romance I have ever read. It has the most real history and the most real love. Roger Kean is a genius.

For a reason I cannot yet fathom, I entered Malco Barca's life expecting a manly romance. There were a lot of manly characters but this is not a romance. Wonderful historical fiction yes, man-on-man romance no. And it's not the author's fault, he never advertised THUNDERBOLT as such. Mea culpa, mea culpa, mea culpa.

This doesn't imply you will not find delicious boy bits ravished here and there, in superbly well-carried love scenes.

Nevertheless, what didn't make me love this story (more) was the constant depiction of battle strategies and maneuver details. This made the story kind of History schoolbook-ish for me. A simply matter of attraction.

If you are a history buff and love sexy scenes thrown in the middle of the discourse, this is the book for you.