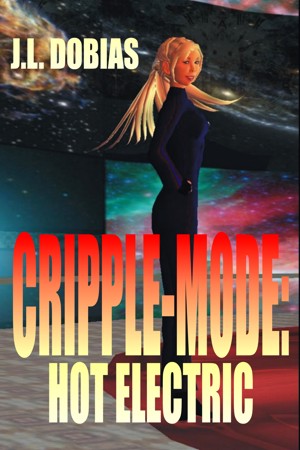 By J.L. Dobias
Rated 4.67/5 based on 3 reviews
Travis Lucia Hamilton-McQueen just back from near death and not keen on revisiting: wants her life back. Granddaughter of a murderer; daughter of a convict; suspected terrorist. No: not that life. A soulless clone amnesiac with a Dissociative fugue identity; consigned to convalesce on Medical Space Station Perl: is bad enough. Mix in a rogue General and some assassins and life becomes interesting. More
When Travis gets a second chance, she goes all the way. A new life; a new body; and even some new memories. The memories come with extra baggage that she would rather have left behind, if she could have; unfortunately at the time of arrival she was in a coma. Regardless; they're the only memories she had; no matter how insane they made her sound to the staff of the Medical Space Station Perl.

Travis is a clone, produced from a family line of murderers; convicts; and terrorist. To be fair, she's the one being accused of being a terrorist. At least she's fitting into the family. She has no memories of herself to confirm or deny the evidence, but if medical tests are to be trusted; she's the Granddaughter of Dane Hamilton and daughter of Travis Hamilton. And if that's true then what's ultimately crazier than her strange memories, is the person belonging to those memories.

The explanation lies with the League Jump Guild, people in charge of the technology that drives Starships through deep space. Travis would rather not deal with the LJG for a number of good reasons including the fact that they suspect she's used Black Tech or stolen Jump Technology to illegally jump through space. Worse yet, she did so without the protection of a space ship or space suit, which exposed her to a number of theorized conditions that would account for her present fugue like state of identity confusion. The LJG would say a person would be quite mad to do as she's done, with little chance of surviving. Being alive could seem like a blessing, if she overlooks the expected eventual outcome of such a capricious act: a severe irreversible psychotic episode.

When Travis and a nurse are attacked; two staff members die under suspicious circumstances; and an LJG General, with an agenda, comes calling on her; she checks herself out of the facility and bolts. Using her father's knowledge she attempts to hide out on a space station in the middle of nowhere with few practical places to conceal herself and begins to wonder if this all might be the beginning of her psychosis. While fearful of becoming unhinged and dangerous, she must avoid the people trying to kill her and find a way off the station so everyone will be safe. But Travis brought something back with her from JumpSpace that wants her to remain on the station: to complete a task or finish driving her completely over the edge.

J.L. Dobias is a Science Fiction and Fantasy Author and the author of the Cripple-Mode series. He lives in Michigan in the USA and has spent most of his time in the Great Lake State.

When he first learned to read, his father introduced him and his siblings to Science Fiction. In a short time he became an avid reader of Science Fiction and has spent over 50 years enjoying some of the best.

Having worked in the Hotel, Restaurant, and Retail management while paying for college to obtain a degree in English, he was promptly hijacked for some time into Hotel Restaurant Management. He eventually landed for a short time at MSU as Engineering support and the head of the electronic drafting and documentation department of the National Superconducting Cyclotron Laboratory. He now works as Lead CAD Engineer and Technical and Engineering Support for Instrumented Sensor Technology; an impact data recorder instrument maker; supplying needs of a variety of industries including the shipping industry, race cars, accident reconstruction, aerospace, amusement parks and many more.

He spends his free time honing his writing skills and continuing to read at least one novel a week in his favorite genre.

CRIPPLE-MODE: HOT ELECTRIC is the first of a planned series.

If you are looking for a casual read that is over and done with in a day, this is most certainly not the book for you. This book is in every way that matters huge, even speed readers can expect a sizable journey to reach the end. While the length insures you get a good bang for your buck, it can be a source of frustration as it was for this reader. This is because while your mind is filled with an overwhelming number of questions, anything like answers trickle in slowly by dribs and drabs through a means that can be frustrating. Nearly all there is to learn about the characters and the world spun into being inside the pages of this book is transmitted through dialogue as a opposed to narration. That means there is a ALOT of talking, and because of that quantity it can at times feel tedious and frustrating to read so many pages of back and forth exchanges.

That aside J.L. Dobias has created a world which is convoluted, complicated, and filled nearly to overflowing with complexity with adds greatly to the realism, because lets face it life isn't ever simple. Be warned, however, that for all that this book is massive, answers it seem are still some distance away as this book can feel incomplete as it cuts off in essence, mid-story. Beyond that the author does a good job establishing the characters towards some future end and creating a very complex world filled with what from my perspective is unique science. He does a good job of spinning up a tale filled with tension and mystery and leaving a reader near screaming with a growing need for answers.

While ultimately this reader ended up feeling some greater and lesser forms of dissatisfaction and periods of frustration, that should by no means dissuade fans of science fiction from giving this book a good, long walk through the woods of this other world. This is certainly not another of those watered down, casual reads that have no real substance and blank slates in the place of characters. This book is filled with strange characters, secrets, mysteries and a search for answers which carries a reader along with the main character as she herself seeks to understand the world she is awoken too. I for one will be moving on ahead to see what might be discovered as this series is continued.

Cripple Mode: Hot Electric is a great first novel. The story is compelling, kept me up late. Good character developement. Plot ccomplexity is very good without being overwhelming. The futuristic space travel and clones is necessary to the story but does not dominate. The science is inexplicable anyway. I look forward to reading more from J.L. Dobias.

Cripple Mode: Hot Electric is a sci-fi novel that brings in elements of action, thriller, the occult, astrology, religion, politics and cloning all in one neat, package. This account is well written and easy to follow despite the technical explanation of space travel and station life in the universe of Cripple Mode.

J.L. Dobias has a great start at a first novel.

The main character, Travis, is a twenty-three year old male, suddenly finding himself in the body of an sixteen-year old girl. Being in the wrong body is the least of her problems as she fights for her life against evil. Her situation seems bleak as the story unfolds. She's a clone and is the granddaughter of an accused mass murderer.

It's difficult enough to get used to her gender swap without having to prove her worth. Through the knowledge she has from her former self she eventually earns her place on the space station.

A large portion of the book involves some world building, because this is the first of a trilogy. So, with the mechanics and rules behind JumpSpace technology there's a bit of ground to cover. This is tied neatly with the reasons for Travis's apparent transformation.

The book is an epic length. Filled with some interesting female characters. The world building reminds me a bit of Dune. It's all gathered in a well-written easy to read if somewhat long package that leaves you wanting to know what will happen in the next book.

You have subscribed to alerts for J.L. Dobias.

You have been added to J.L. Dobias's favorite list.

You can also sign-up to receive email notifications whenever J.L. Dobias releases a new book.