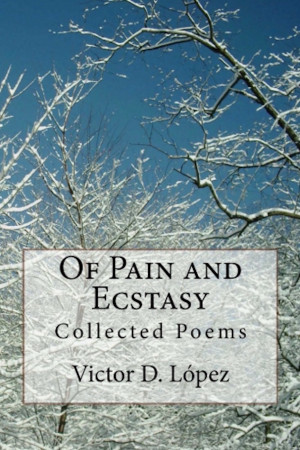 Of Pain and Ecstasy: Collected Poems

By Victor D. Lopez
This collection of poems presents a unique perspective on enduring themes--love, existentialism, the darker side of life in an urban environment, loneliness, quiet heroism and the transcendent power of poetry to rebuild weary souls and teach lessons we may not want to learn.

Professor López published several textbooks in the areas of business law and the legal environment of business that have been used in colleges and universities throughout the U.S. since 1993. His past publishers include Irwin/Mirror Press, McGraw-Hill and Prentice Hall, and in 2010-2011 he published two revised and expanded business law/legal environment textbooks with his new publisher, Textbooks Media, that are available in inexpensive print and electronic versions. The third edition of his Business Law and the Legal Environment of Business was published in July 2016 (2017 Copyright--available at http://www.textbookmedia.com/Products/ViewProduct.aspx?id=4396 ). He has presented articles at conferences and published scholarly articles in refereed journals in recent years in a range of subjects that include immigration law, bankruptcy law, unauthorized practice of law, state and federal efforts to regulate the high cost of college textbooks, and ethics among others. (For a list of current publications you can visit http://victordlopez.com/index.html.)

Since 1990, he has served as a Professor of Business for 12 years at SUNY Delhi and more recently as the dean of the business division at Broome Community College for four years immediately prior to joining the Hofstra University faculty. He has also served as a professor and dean at other higher education institutions since 1987.

Professor López has published law-related textbooks for Irwin/Mirror Press, McGraw Hill, Prentice Hall and Textbook Media Publishing. Since 2011 he has also published short story collections, a book of poetry and a general reference book on intellectual property in paperback and eBook versions through CreateSpace, Kindle Direct Publishing (Amazon) and Smashwords.

Reading #2: Remedios
This is my reading of an excerpt from the longest free verse poem in the collection about one of my unsung heroes--my maternal grandmother.

Poetry Reading -- Mi Canto / My Song
This is a poetry reading of the new poem Mi Canto in its original Spanish as well as its English translation.

Poetry Reading: A Sampler of My Newer Poems
This is a poetry reading recorded May 12, 2020 from a selection of my newer poems that will appear in my next poetry book. The selection includes free verse, blank verse, sonnets and linked haikus and runs for approximately 14 minutes.

Poetry Reading -- 16 Sonnets 2020
This is a poetry reading by the author of 16 sonnets, some from his Of Pain and Ecstasy book of poems as well as new ones.

You have subscribed to alerts for Victor D. Lopez.

You have been added to Victor D. Lopez's favorite list.

You can also sign-up to receive email notifications whenever Victor D. Lopez releases a new book.