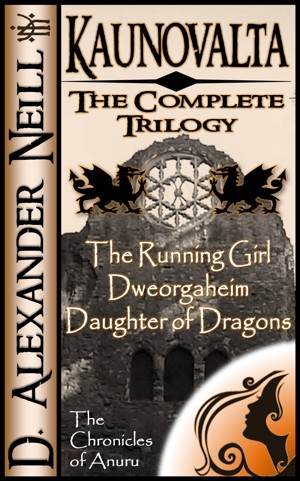 Ally of Eldisle, falsely accused of treason and murder, flees to the Dwarf-realm and finds wonders undreamed-of. Struggling to return an ancient treasure to its rightful owners, she must come to terms both with a bloodline lost in the depths of antiquity, and the awful powers that are her birthright. More
The Running Girl

"Outstanding debut novel and a great new series. Five out of five stars."

Ally of Eldisle, sword-thegn and sometime mage, bears twin burdens: a complicated heritage, and a penchant for finding herself in the wrong place at the wrong time. Faced with false accusations of treason and murder, she flees to foreign lands, finding enemies all around, friends in unexpected places, and wonders undreamed-of. While struggling to keep an ancient treasure out of unfriendly hands, she is forced to reconcile her preconceptions about the wider world and its myriad inhabitants with her own origins - and to come to terms with the meaning of a bloodline lost in the depths of antiquity, created by ancestors both inhuman and unknown, and with the awful powers they have bequeathed her.

Secure in the company of her new companions, Ally is drawn into the majesty and mysteries of the ancient realm of the dwarves. From the fires and forges of the foundry towns to the incomparable wonders of Ædeldelf, greatest of the cities of the Deeprealm, she follows her destiny, seeking ever to return the ancient treasure that she has been accused of stealing to its rightful owners. Aided by Frideswide, a priestess of Khallach the Stoneteacher; her husband Wynstan, one-time warrior and veteran of the Iron Guard; and Uchtred, an engineer and master metal-worker, Ally delves ever deeper into the ancient underground fastness of Dweorgaheim – and learns to her dismay that regardless of whether they are buried deep in the earth, or deep in her own past, some secrets are best left undisturbed.

Lost in the depths of Dweorgaheim, surrounded by foes, Ally finds friends and allies in unexpected places. As she struggles to reach Underdarrow and the First Forge in order to keep her oath, names from her past reappear to aid her. Locked in a duel to the death with the unchecked hordes of an abomination from beyond the walls of the world, Ally struggles with love and loss, and begins to understand both the true nature and limitless scope of the power that lies within her, and just how costly realizing that power might be.

D. Alexander Neill is the nom-de-plume of Donald A. Neill. A retired Army officer and strategic analyst, Don is a graduate of the Royal Military College of Canada (D.E.C. 1986 and BA 1989), the Norman Paterson School of International Affairs (MA 1991), and the University of Kent at Canterbury (Ph.D. 2006). He began writing fiction as a creative outlet in Grade 6, managing to overcome devastating reviews of his first novel, which he wrote in 2H pencil in seven taped-together college-ruled notebooks. He initially chose the fantasy genre because he was sucked into it at the age of 11 by the irresistible double sucker-punch of The Hobbit and Star Wars, never managed to escape, and eventually gave up trying. He intends to branch out into other fictional fields of endeavour, but will always return to Anuru, where – Allfather willing – there will always be at least one more story waiting to be told.

Don has been married for 20 years to a Valkyrie, and has two children, both of whom resemble her in temperament and, fortunately, looks.

I thoroughly enjoyed this trilogy - couldn't put them down most of the time! This author has done an amazing job of creating worlds, societies, characters and a plot line that keeps you completely engaged and wanting more.

You have subscribed to alerts for D. Alexander Neill.

You have been added to D. Alexander Neill's favorite list.

You can also sign-up to receive email notifications whenever D. Alexander Neill releases a new book.