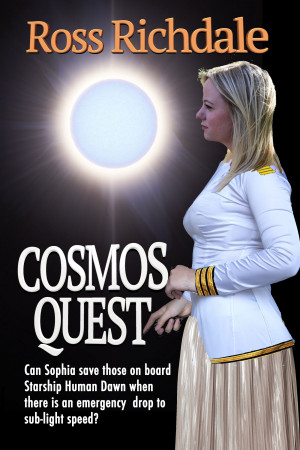 A human woman, Kyla Adair has caused this. She is escaping from an alien world of human type beings called benefactors who, it is later found out, cloned her from a long dead member of a Human Sunset. After no senior officers are found to be alive, two other junior crewmembers, Penny who has the ability to 'feel' the truth, and Jack, an electronics expert are awoken. The three find the starship is occupied by of human terrorists who have killed the senior officers and are torturing two benefactors, Daz and Foxin.

They rescue the pair and attempt to gain control of the vessel. They are only partially successful but manage to blast the three self-life-supporting drones containing the suspended animation humans away from the Human Dawn before it is destroyed. They also escape in the Dawn Rescue 'lifeboat' and Kyla's damaged Zarel 29 benefactor spaceship.

Daz and Foxin prove loyal but will other benefactors help the humans, which they regard as inferior to themselves?
Sophie finds the computers have the ability to mutate into advanced forms! Are they really the new life species that supersede the 'inferior' humans and benefactors?

Are any planets that support intelligent life safe?

Readable, I'm not totally convinced of some of the computer logic but still readable.