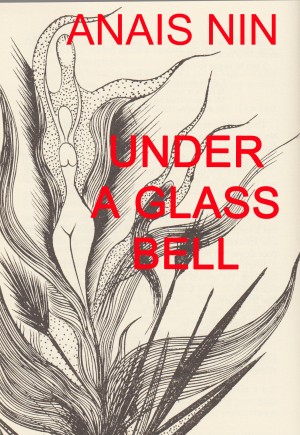 Under a Glass Bell

By Anais Nin
Often considered Anais Nin's finest work of fiction, this collection of short stories was self-published by Nin with an old-fashioned hand press in 1944. Among the titles are "Houseboat," "The Mouse," "The Labyrinth," and "Birth."

Anais Nin (1903-1977) was born in Neuilly-Sur-Seine, near Paris, and was the daughter of a renowned pianist and composer, Joaquin Nin. Abandoned by her father in 1913, she and her family traveled to New York, where she began her now famous diary, comprised of some 35,000 pages over a period of six decades. When the first volume of 'The Diary of Anais Nin' was published in 1966, it began Nin's meteoric surge to fame. However, often overlooked are the works of fiction she created, beginning with 'The House of Incest' in 1936, which was followed by a then-banned edition of a collection of novellas under the title 'The Winter of Artifice.' This original edition has been republished for the first time in 2007. Perhaps Nin's most acclaimed fiction is the series of short stories in 'Under a Glass Bell,' which she self-published in New York during the 1940s when no commercial publisher would take the risk. She then began a series of novels that were interconnected and finally collected into one volume entitled 'Cities of the Interior.' Her final novel was 'Collages,' about which Henry Miller said, "Even the finest collages fall apart with time; these will not."

Anais Nin was one of the 20th century's most innovative and compelling artist, and now her works are finally appearing in digital format.

You have subscribed to alerts for Anais Nin.

You have been added to Anais Nin's favorite list.

You can also sign-up to receive email notifications whenever Anais Nin releases a new book.