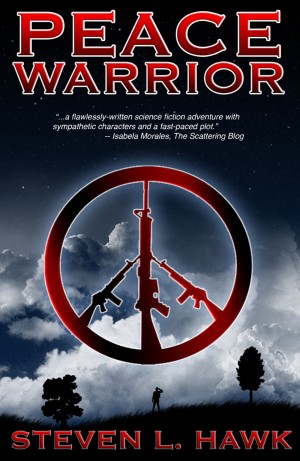 By Steven L. Hawk
Rated 4.33/5 based on 12 reviews
Six hundred years after his death, SFC Grant Justice is re-animated by a team of scientists.

Grant is humankind’s final hope against the alien menace. He must be… the Peace Warrior. More
It’s the mid-21st century when Sergeant First Class Grant Justice is killed during an ambush on an enemy tank column.

Steve spent six years as a Military Intelligence Specialist with the U.S. Army's 82nd Airborne Division before joining the ranks of corporate America. He has a B.S. in Business Management from Western Governor's University and is a certified Project Management Professional (PMP). He has traveled extensively across the United States and, at various times, has lived in Georgia, North Carolina, West Virginia, Massachusetts, California and Idaho.

Steve Hawk currently resides in Boise, Idaho with his wife, Juanita, their two chihuahuas, Daisy and Cheech, Together, they have a blended family of five sons.

This was a great read. I enjoyed every page.

This novel is very much in the tradition of the movie "Soldier" and Heinlein's novel "Starship Troopers". We have an Earth that has created a peaceful utopia - war and conflict have been eliminated. So what do humans do when aliens invade? They go to war - but they need someone to teach them how. Well, any soldier will tell you that the sergeants actually run the army. Who expected Sgt. Grant Justice to actually have to prove it?

I enjoyed your book "Peace warrior", keep up the wonderful writing!

I purchased this story on Amazon.
On the surface, the central hero character, SFC Grant Justice, is just as much a gung-ho, space cowboy as that awesome name suggests. However, the author does a pretty good job bringing him back down to earth through oscillating bouts of overconfidence and self-pity. Creating a bad-ass hero is easy. Building one regular people can realistically identify with is a harder task.

The essence of Mr. Hawk’s story is fairly unique and intentionally funny. A time traveling soldier from the “barbaric times” is awoken by a “socially deviant” scientist over 600 years later. Against all odds, the author is able to pass this off as plausible. At least to us non-biologists. From there, our self-loathing John Wayne forces a sheepish world into a high-stakes battle against wild injuns… I mean aliens.

This is where the story becomes overly formulaic. There were several big twists that just lack the impact because they were a bit too predictable. Still, that’s an ancient complaint for most stories. The only real weakness of this tale is the length. Mr. Hawk wraps up the story arc and all just fine, but you’re still left unsatisfied. Belly not quite full and aching for seconds. Of course, isn’t that a hallmark of a good author?

Well-polished novel. Especially for an Indie. The author mentions his second edition being “professionally edited.” I think it’s safe to say he got his money’s worth and so will the reader.

I could not read anymore of this story due to the loss of my suspension of disbelief. The main character's incident at the beginning of the story was completely unbelievable, causing me to totally lose interest.

I have read this book and the two subsequent volumes in this series. They were good military SF that kept my attention and moved right along. I recommend these as well worth the price to anyone who enjoys military SF. Go ahead and at least buy the first one; I bet you'll be back for the other two!

This book takes the liberal agenda to one of its possible conclusions. It also shows what a single well trained leader can possibly accomplish if given help.
Inconsistancy I noted was the weapons and ammunition left in the so called museums and private collections. This could indicate that conformity to societies norm is only surface deep and I think true to life.
I enjoyed this book immensely! I'll be getting the rest of the series in the future.

This was such an enjoyable book, I will save it back and read it again in a few months. So, do I owe you 10 stars ?

Loved it, great read. From a completely different perspective, I bought the other 2 books in this series based on the strength of this book. Highly recommended f you like space adventures

You have subscribed to alerts for Steven L. Hawk.

You have been added to Steven L. Hawk's favorite list.

You can also sign-up to receive email notifications whenever Steven L. Hawk releases a new book.