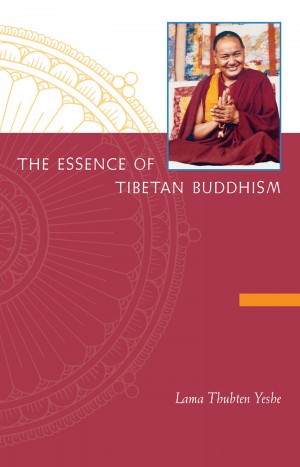 The Essence of Tibetan Buddhism

By Lama Yeshe
The first teaching, “The Three Principal Aspects of the Path,” was given in France in 1982.

The second teaching, an “Introduction to Tantra,” also in two parts, was given at Grizzly Lodge, California, in 1980.

These comprise the first two lectures of a commentary on the Chenrezig yoga. More
The first teaching, “The Three Principal Aspects of the Path,” was given in France in 1982.

The second teaching, an “Introduction to Tantra,” also in two parts, was given at Grizzly Lodge, California, in 1980.

These comprise the first two lectures of a commentary on the Chenrezig yoga.

Lama Yeshe says:
"Meditation is not on the level of the object but on that of the subject - you are the business of your meditation.

"Bodhicitta is very practical, I tell you. It’s like medicine. The self-cherishing thought is like a nail or a sword in your heart; it always feels uncomfortable. With bodhicitta, from the moment you begin to open, you feel incredibly peaceful and you get tremendous pleasure and inexhaustible energy. Forget about enlightenment - as soon as you begin to open yourself to others, you gain tremendous pleasure and satisfaction. Working for others is very interesting; it’s an infinite activity. Your life becomes continuously rich and interesting.

This title was published by the Lama Yeshe Wisdom Archive, a non-profit organization established to make the Buddhist teachings of Lama Yeshe and Lama Zopa Rinpoche freely accessible in many ways, including on our website for instant reading, listening or downloading, and as printed and electronic books. Our website offers immediate access to thousands of pages of teachings and hundreds of audio recordings by some of the greatest lamas of our time. Our photo gallery and our ever-popular books are also freely accessible there. You can find out more about becoming a supporter of the Archive and see all we have to offer by visiting the Lama Yeshe Wisdom Archive website.
Available ebook formats: epub mobi pdf rtf lrf pdb txt html
First 30% Sample: epub mobi (Kindle) lrf more Online Reader
pdb
Price: $0.99 USD
Buy Add to Library Give as a Gift
How gifting works
Create Widget
Tags: buddhism mental health loving kindness four noble truths tibetan buddhism buddhist teachings buddhist tantra compassion practice
About Lama Yeshe

Lama Thubten Yeshe was born in Tibet in 1935. At the age of six, he entered the great Sera Monastic University, Lhasa, where he studied until 1959, when the Chinese invasion of Tibet forced him into exile in India. Lama Yeshe continued to study and meditate in India until 1967, when, with his chief disciple, Lama Thubten Zopa Rinpoche, he went to Nepal. Two years later he established Kopan Monastery, near Kathmandu, Nepal, in order to teach Buddhism to Westerners.

In 1974, the Lamas began making annual teaching tours to the West, and as a result of these travels a worldwide network of Buddhist teaching and meditation centers - the Foundation for the Preservation of the Mahayana Tradition (FPMT) - began to develop.

In 1984, after an intense decade of imparting a wide variety of incredible teachings and establishing one FPMT activity after another, at the age of forty-nine, Lama Yeshe passed away. He was reborn as Ösel Hita Torres in Spain in 1985, recognized as the incarnation of Lama Yeshe by His Holiness the Dalai Lama in 1986, and, as the monk Lama Tenzin Osel Rinpoche, began studying for his geshe degree in 1992 at the reconstituted Sera Monastery in South India. Lama’s remarkable story is told in Vicki Mackenzie’s book, Reincarnation: The Boy Lama (Wisdom Publications, 1996). Other teachings have been published by Wisdom Books, including Wisdom Energy; Introduction to Tantra; The Tantric Path of Purification (Becoming Vajrasattva) and more.

Thousands of pages of Lama's teachings have been made available as transcripts, books and audio by the Lama Yeshe Wisdom Archive, and most are freely available through the Archive's website at LamaYeshe.com.

Reviews of The Essence of Tibetan Buddhism by Lama Yeshe

You have subscribed to alerts for Lama Yeshe.

You have been added to Lama Yeshe's favorite list.

You can also sign-up to receive email notifications whenever Lama Yeshe releases a new book.