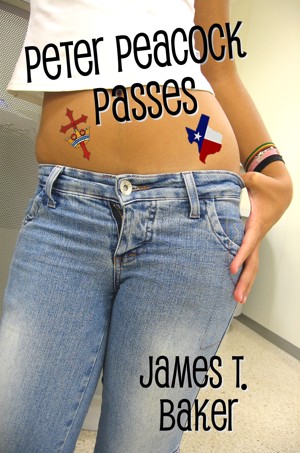 By Dr James T. Baker
Peter Peacock Passes is the tale of a Texas youth in the 1960's who has to come to terms with his desire to become a minister and find a meaningful relationship. Follow Peter's misadventures as he learns to minister to his flock and the women he meets along the way. When one adds in the needs of those Peter ministers to, the path to the straight and narrow becomes complicated. More
Peter Peacock Passes proves the commonly held perception that for Preachers the pursuit of God and Sex are twin obsessions. Master story teller James Baker has captured with the most vivid prose the pitfalls and pratfalls of a young Texan who feels equally the desire to fulfill his Divine Vocation and his Natural Urge to find a mate. In his quest Petie Peacock struggles to survive the seductions of a college beauty queen, a delectable farmer's daughter, a high school cheerleader with Italianate mammary endowments, and a strange pair of twins named Golda and Silvia before at last he finds his Mary Sontag. He participates in the annihilation of a Homecoming float, pranks that result in blood, and the destruction of a prominent Baptist minister when pornographic pictures end up in his slide show of the Holy Land. He is humiliated in Indiana, abandoned in Chicago, and deluged in Texas before he discovers in his tumescence a way to face this brave new world. Share the fun.
Available ebook formats: epub mobi pdf rtf lrf pdb txt html
First 25% Sample: mobi (Kindle) lrf pdb Online Reader
Price: $3.99 USD
Buy Add to Library Give as a Gift
How gifting works
Create Widget
Tags: coming of age texas faith sex college christian pastor girls minister preacher peter peacock baylor james t baker
About Dr James T. Baker

James Baker developed his passion for history and religion while in high school, during his days as a Bulldog. He is a graduate of Baylor and Florida State Universities and has for many years taught at Western Kentucky University. Throughout his career he has been a prolific writer, authoring 22 books and over 60 articles. His articles have appeared in such places as Christian Century, Commonweal, The Chronicle of Higher Education, and The American Benedictine Review. His creative talents and his unique points of view and insights have also made him a highly sought after speaker. He has delivered addresses and papers in the United States, Italy, Korea, Taiwan, China, and other Asian countries. He often appears in a one person show-presentation of industrialist-philanthropist Andrew Carnegie. In addition to his teaching duties, James directs the Canadian Parliamentary Internship Program.

You have subscribed to alerts for Dr James T. Baker.

Would you like to favorite Dr James T. Baker?

You have been added to Dr James T. Baker's favorite list.