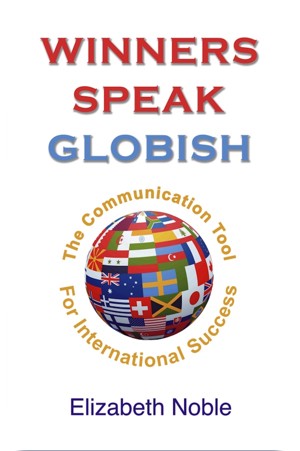 By Elizabeth Noble
Rated 3.67/5 based on 3 reviews
If you use English that's too dense or too subtle,YOU COULD BE LOSING BUSINESS!
Only 5% of English spoken in the world is among native speakers. More than a billion global citizens are looking for a simplified form of English.
"Whether you are delivering a speech,negotiating a contract or doing business in another country, Globish is the answer and this book is your guide." Dan Poynter.
Available ebook formats: epub mobi pdf rtf lrf pdb txt html
First 50% Sample: epub mobi (Kindle) lrf more Online Reader
pdb
Price: $7.75 USD
Buy Add to Library Give as a Gift
How gifting works
Create Widget
Tags: spelling public speaking slang communication skills english as a second language english grammar metaphors global english figures of speech idioms presentation skills international communication
About Elizabeth Noble

Born and raised in Australia, I have travelled and taught seminars all over the world. A professional member of National Speakers Association of USA, I am currently starting a Professional Speakers Association of Panama, where I now live. I have published several books on health, since I trained as a physical therapist. I also have a degree in Anthropology and Philosophy. I am very interested in languages and communication skills, hence my new book on Globish.

I wish all adolescents whose native language is English would read the book by Elizabeth Noble about “Globish”. They will realize that their first duty is to train themselves to speak “Globish” rather than to learn foreign languages. They need to know that Globish is a reality: while my first language is French, it is thanks to a correct, simplified, and non-colloquial English that I can enjoy ongoing communication with Brazilian or Japanese colleagues or friends. Globish has a future, because it is not an artificial language. It is like a living creature that develops and spreads out according to the laws of natural selection. Those who have absorbed the English language since infancy need the talent of an experienced writer such as Elizabeth Noble to become really aware of the current turning point in the history of languages.

(reviewed the day of purchase)
Barbara Adler reviewed on Aug. 10, 2010

This book gives an excellent explanation of Globish, exactly what I had hoped when I purchased it. Not only does the author tell what idioms and phrases to avoid, she gives clear instructions of what to use. Anyone who communicates with people outside English-speaking countries needs to read this book. A brief review of grammar is even included! The Appendix is extremely valuable.

This book made me aware of the Globish movement, but offered very little else of value. It felt like a book that was written simply to be marketed as a revenue stream.

You have subscribed to alerts for Elizabeth Noble.

You have been added to Elizabeth Noble's favorite list.

You can also sign-up to receive email notifications whenever Elizabeth Noble releases a new book.