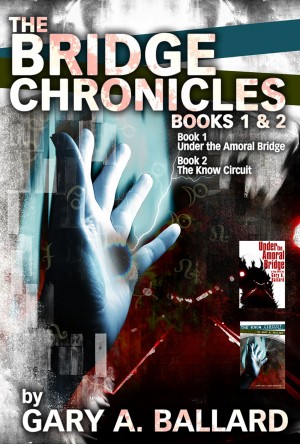 By Gary Ballard
Rated 4.00/5 based on 1 reviews
This edition collects Books 1 & 2 of the critically-acclaimed cyberpunk series, The Bridge Chronicles, starring Artemis Bridge, the amoral fixer of the future. It contains the full text of both Under the Amoral Bridge and The Know Circuit, as well as two short stories that were only available in the published editions.

You can read the reviews for Ballard's first entry in the Bridge Chronicles, they are spot on. Over the Amoral Bridge is a fun, exciting read with memorable characters and enjoyable noir cyberpunk feel.

The first half of the Know Circuit promises the same enjoyable noirish thrill ride of The Amoral Bridge, but the second half gets bogged down with some ancillary characters (the scientists behind the strange happenings) and their back story which I found to be duller than dishwater. These characters held no interest, and their dialogue and actions were campish and starkly out of place in the world Ballard had so successfully created. I wanted these charaxters to die quickly so that we could get back to Bridge, Aristotle and the entourage of streetwise fellow travelers.

I look forward to Ballard's next entry in the Bridge Chronicles, and I hope he can get back to the heart of the world without the less interesting "super hero" distractions found in The Know Circuit.