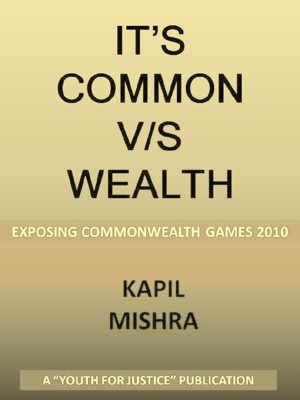 Kapil is an activist and social entrepreneur.

As co-founder and coordinator of “Youth for Justice”- a New Delhi based youth action group that works on spontaneous issues that need cognizance, he has led the youth protest on various socio-economic issues including Jessical Lal murder trial, issues of Farmers suicides in various parts of country, reservation in higher education, encroachment on Yamuna river bed and various other issues that directly or indirectly affect our common future.

For last three years, He is spreading voice against the anti people development approach that is being practiced by authorities in the name of Commonwealth Games in the city.

A Masters in Social Work from Delhi School of Social Work, Kapil is presently doing M.B.A. (P.T.) from Faculty of Management Studies (FMS) University of Delhi. Currently he is working with Greenpeace India as Policy Officer.

Reviews of It's Common V/S Wealth by Kapil Mishra

a timely book that talks about distorted development and exploitation of people and resources in name of commonwealth games.

simple and easy to understand yet thought provoking book
a must read for all concerned individuals...

You have subscribed to Smashwords Alerts new release notifications for Kapil Mishra.

You have been added to Kapil Mishra's favorite list.

You can also sign-up to receive email notifications whenever Kapil Mishra releases a new book.