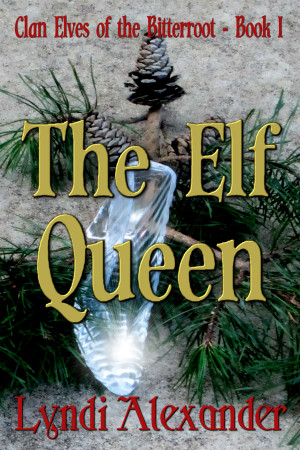 Lyndi Alexander always dreamed of faraway worlds and interesting alien contacts. She lives as a post-modern hippie in Asheville, North Carolina, a single mother of her last child of seven, a daughter on the autism spectrum, finding that every day feels a lot like first contact with a new species.

Also in Series: Clan Elves of the Bitterroot

Reviews of The Elf Queen by Lyndi Alexander

THE ELF QUEEN will make you wonder if magic is real. A hardworking young woman named Jelani becomes involved with a group of people living in the Montana forests who claim to be elves with magical powers and that she is related to them. Jelani finds herself scrutinized by enigmatic elf elders, pursued by handsome warriors, and caught in the middle of a dangerous elf war. THE ELF QUEEN is a suspenseful tale with interesting characters. It's one of those books you just cannot put down!

This is a sophisticated updating of the Cinderella fairy tale. But instead of the familiar parameters, it all gets torn apart and rebuilt. Jelani finds out she's something special when she tries on a glass slipper that appears out of nowhere, on the street, and she cuts her foot. A group of tiny men spring into existence and go running into the grass alongside the road. Iris, her best friend manages to get it all on her camera! They take the video to her two other friends--reclusive males who never leave their apartment--Crispy is agoraphobic, in fact that's how she met him--her bestie is a social worker treating him. The other guy is a stereotypical computer nerd who lives for wi-fi and never leaves his computer keyboard. Together they try to figure out what's going on. When people start stalking Jelani in the coffee shop she works in, the plot thickens quickly. By the end, she's learned who she really is, and her friends have proven themselves, since all three of them accompany her on a dangerous quest to finally solve the mystery that landed in her lap. Dangerous situations with evil fairies are faced, with good fairies on their side--and Jelani chooses her Prince Charming. And yes, there is a happy-for-now ending. I get the feeling that there's more to come in this story.

An intriguing, well-written, must read book with characters you will love!

You have subscribed to alerts for Lyndi Alexander.

You have been added to Lyndi Alexander's favorite list.

You can also sign-up to receive email notifications whenever Lyndi Alexander releases a new book.