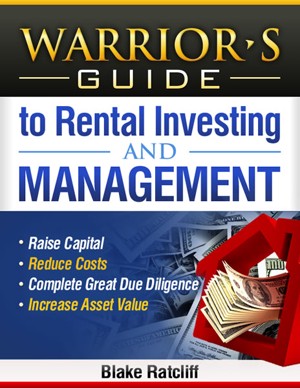 Plus - the volume includes an industry glossary, a sample business plan, a sample executive summary, an example pro forma, and much more.

Today, Blake Ratcliff is a principal in a multi-family-focused investment in the Washington, DC market – Capital Area Secured Assets, LLC (CASA). This investment group focuses on purchasing smaller multi-family properties in the immediate District of Columbia area and intends to expand outward over time. Besides acting as an investment manager and principal, he is responsible for the management activities of the company including marketing, leasing, accounting, resident management, customer service, maintenance management, compliance, and all other facets of the day-to-day operations.

Prior to CASA, beginning in 2005, Blake assembled a portfolio of 1,000 units supported by a management company of 60 staff and contractors that he founded and developed in the Southeastern United States (Alabama, Georgia, and North Carolina). This included several dozen investors, over $5,000,000 in equity capital, and tens of millions of dollars of debt. During the course of this activity, Blake enjoyed extraordinary returns and devastating losses as he bought, grew, and eventually divested this portfolio in early 2010.

His company was completing leases with prospective renters in Afghanistan and Iraq through an online application, qualification, and electronic signature process as early as 2008. Almost 10% of leases were completed sight unseen with the first resident meeting at key pickup to move in. Blake believes that an opportunity exists for managers to gain a real operating advantage by understanding the cycle of behavior consumers demonstrate while shopping for and selecting a rental home. Additionally, he believes there are hidden revenue opportunities in gaining a greater understanding of resident behaviors and priorities once they move on the property as a renter. Blake’s significant experience with applied statistics is a major component of his examination of this area.
He is applying this expertise to develop new marketing, product, and lead management for potential new revenue streams in the rental market.

Blake has various other business interests in the Government Sector and sometimes provides investment and executive management consulting and support to a wide range of investment groups, companies, and individuals for operations varying from manufacturing to technology services to real estate investment planning in the United States and around the world.

Blake is a father of 4 children and married to the former Sara Boney, a University of North Carolina graduate, a former Congressional Chief of Staff, and current U.S. Navy executive. Blake serves on the board of trustees for the Union Institute and University. Additionally, Blake has completed the United States Marine Corps Marathon twice – in 1998 and in 1999. Blake is a scuba diver and an avid reader.

Blake has had the opportunity to write 100 or more business plans, a similar number of financial models, return tables, sources and uses, executive summaries, market studies, and other investor-related documents. He expects that he has delivered 10X as many presentations on the subject of business opportunities. An engineer, he has been accused of being a CFO. As an operations executive, Blake has developed standard operating procedures, staffing plans, training plans, reporting systems, and service plans minimizing cost, maximizing revenue, and assuring high and increasing service levels.

Blake is a United States Naval Academy (USNA) graduate, former Marine Officer, former USNA 1984 class president, and a sometimes speaker on business issues. Over the past 30 years, he has held a wide range of executive management positions including CEO, Founder, COO, VP of Operations and Engineering at 9 startups and served in varying capacities at two Fortune 500 Companies (Springs Industries and General Electric). Additionally, Blake has served on the board of two privately held companies, has worked as an independent contractor, and spent a short time as an executive recruiter.

Between 1995 and 2003, Blake was part of the management team or part of the investment team for 9 different startups (WinStar Wireless, Dyntel, Ntegrity Communications, Apartment Communications Inc, China Wireless, Chinawave, WorldNet, Stox.com, and others). At these companies, Blake developed his skills assembling business plans, developing organization and entity structures, supporting investor activities, providing investment presentation support, and deploying and executing business plans. The largest grew to from 33 to 2,000 employees in three years. Some never made it to active operations. In two cases, he served on the team launching businesses successfully in Beijing. One of these still survives today as Tiangui or Goldtel and is led by Peter Wei, a Chinese entrepreneur. Blake raised or assisted in raising tens of millions of dollars for these activities.

Blake grew up on a 1,100 acre cattle ranch in central Oklahoma. On the ranch, he learned to ride about the time he learned to talk. Blake herded, branded, birthed, and performed all manner of cattle ranch “stuff”. He spent much of his childhood hanging out on the banks of Oklahoma’s North Canadian River where he spent a lot of time fishing and hunting.

You have subscribed to alerts for Blake Ratcliff.

You have been added to Blake Ratcliff's favorite list.

You can also sign-up to receive email notifications whenever Blake Ratcliff releases a new book.