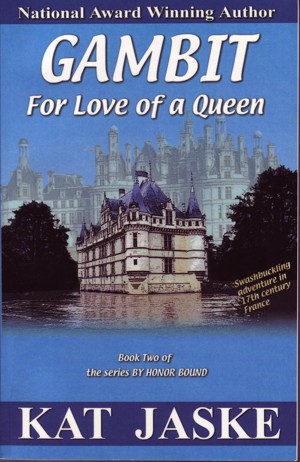 Gambit For Love of a Queen

Excerpt 1:
The woman shook her head. “I will slow you down too much. You’ve got to find Laurel, Athos, and Porthos. Go on ahead. Bring them back here. Please. Please,” she pleaded.
“And how will you defend yourself?” Aramis pressed.
The woman shifted and pulled the pistol from her waistband. She cocked and primed it.
“I am still well enough to shoot,” she replied.
Aramis grabbed his sword and stood. Porthos’ sister was far more courageous and self-sufficient than he ever would have suspected. “I’ll be back as quickly as I can. Try to stay out of sight.”
The musketeer dashed off down the corridor, Yvette watching, holding tight to the gun as if it were her lifeline. “God, please, let Aramis come back soon.” She was not brave enough for this. Already shock was setting in, and she felt ready to burst into tears. She would have called Aramis back, but he was already gone.

Excerpt 2:
Athos! Laurel charged forward, yelling like a woman gone crazy. It was enough to distract an opponent who had been about to deliver a blow that would have sliced Athos’ left arm off at the shoulder.

The fighter glanced at her with contempt and turned his back on the woman, returning to his attack on the tired musketeer. Yet Athos remained remarkably persistent despite the ragged wound that had pierced his right shoulder. And he could have warned the man not to turn his back on Mademoiselle Laurel, but he rather preferred it this way. For with one clean stroke Laurel slashed the attacker’s arm, causing him to clutch at the bleeding limb and drop his sword. He’d never be able to use the arm again. Laurel had severed every muscle and tendon clear to the bone.

“Never turn your back on an opponent, and never underestimate a woman,” she advised as she sidestepped the wounded man and came to stand by Athos’ side.
“I must confess, it is very good to see you, mademoiselle,” Athos said, taking advantage of the brief respite.

The adventure continues. Action with a little romance and the Muskateers.

It's really refreshing to read an author who can weave a great story from multiple characters' points of view. Orson Scott Card has stated that it is very hard to have more than one or two main characters and keep all their interactions interesting and unique. Kat Jaske has several characters all nicely developed and interesting in their own way, and they all present themselves as unique people. I loved Jaske's For Honor, and that's why I read this next book. Gambit introduces a great new adventure for the heroes, who must find and rescue the kidnapped Queen Anne of France. Laurel is gaining a little more control of her actions, and she even is accepting the fact that she might be in love with Aramis. But adventure calls, and they have to stay alive while rescuing the queen. Some of the heroes are injured, or captured or possibly killed and I felt the emotions of everything that was taking place. This is a great adventure to lose yourself in for awhile.

This is great storytelling! I met all these people in the book For Honor and loved the interesting characters and the creative story. If Laurel, or any of the musketeers, would walk into the room, I would know them instantly. Now, the Queen of France has been kidnapped and Laurel again tries to take matters into her own hands—she is still her impetuous self, acting like a modern, independent woman trapped in seventeenth-century France. Calmer heads prevail, and the musketeers convince her that all of them working together stand a better chance of finding the Queen and getting her out, and of keeping the King in the dark about his pregnant wife's disappearance. Luckily, King Louis XIII is not too bright and he doesn't really like his wife, so he doesn't care if she is around or not. That is, until he just wants to check that his heir-to-be is still safe and sound. A heart-stopping adventure takes place as they search for the Queen and as they (try to) avoid the assassins sent to stop them. I was sucked in by the story and the personalities and couldn't stop cheering the heroes (and heroine) and hating the villains. Life is not always fair and deaths of some people you love do happen. It's a very satisfying ending with a hint of the next adventure.

In one scene, D'Artagnan is undercover as a lowly servant in order to try to get information on where the Queen is being held captive. Athos has previously given him a lecture on how important this role is and how D'Artagnan must be the obedient servant, no matter what. . . . The talking swirled about him, sometimes nothing more than gibberish, sometimes a word or phrase he could decipher. It eddied up and down, from loud to quiet.

Wisely, D’Artagnan kept silent as he went about the tasks the housekeeper had assigned him for the morning, some of the least desirable tasks involving a great deal of scrubbing and moving of heavy objects. He was under no illusions about how much he was disliked simply for being French and for what was viewed as outright impertinence. But there would be no more of that, not after Athos’ little talk—more like scolding. D’Artagnan had been ordered to pretend to be obedient and do exactly as was requested of him and to do the job even better than was requested. Annoying, and distinctly inconvenient, to say the least. . . .

Another scene features Athos as the undisputed leader as they began their hopefully not-suicide attack on the kidnappers. Porthos's joking personality shows through. . . . "Are we still of a mind to do this thing?” Athos asked his companions, his voice scarcely expressing the seriousness of the situation.

Danger was terribly real. Impossible to ignore, and the outcome could be decidedly dire. After a brief moment, Porthos and Yvette both nodded. Athos was relieved Porthos put up no argument with regard to his sister this time. He could not have handled that at the moment. Plus, he may well have found himself very tempted to agree with Porthos in trying to protect Yvette from further danger.

"Porthos, you are sure you know where a secret entrance to the castle is?"

"Athos, are you seriously doubting the great Porthos’ word?"

"Non, but I am seriously considering reaching down his throat and tearing out his tonsils with my bare hands if he does not answer the question promptly," Athos informed his friend with a complete lack of levity. . . .