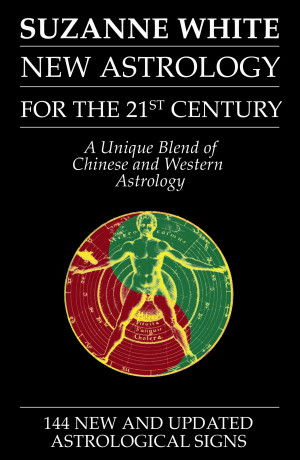 By Suzanne White
A savvy blend of the two main astrologies on the planet. Discover 144 "NEW" Astrology Signs! Author Suzanne White shows us that we have not just one but TWO main astrological signs. A western "month" sign and an Asian "year" sign. Her descriptions of each of the 144 "New" signs are uncannily accurate. You will refer to this amusing, yet serious and informative book for the rest of your born days. More
Though astrology is many centuries old, it is only perhaps once in a generation that a thoroughly new, totally original way of looking at the zodiac is discovered. The New Astrology is such a system. Suzanne White offers a startling and provocative thesis: There are not 12 but 144 signs of the zodiac, each distinct, each unique, each vital to everyone's quest for self-understanding.

By combining the astrological systems of the traditional Chinese (terrestrial) with that of the Occident (celestial), Suzanne White demonstrates that each of us is governed by two signs. Hence, a Capricorn/Tiger is quite different from a Capricorn/Cat, as is a Leo/Dog from a Leo/Dragon, and so on.

This unique marriage of Western and Chinese Astrologies gives detailed analyses of each of the 144 signs, including individualized sections of love, sex and romance, business, money, careers, home life and compatibility (or lack of it) with other signs.

A worldwide best-seller,The New Astrology is a massive undertaking and the result of more than a decade of research and study of the two systems. It offers insights into not only our own lives, but also those of all who are close to us.

Suzanne White's prose is lucid, candid, and suffused with a sense of fun, but The New Astrology is above all a serious tool for self-awareness and understand the rich variety of human nature all around us.

Best-selling Author/Astrologer Suzanne White is American, but she has lived all her adult life in France. In 1971, she began writing articles for women’s magazines and by 1975 had written her first book about Chinese Astrology. Suzanne has published six best-selling books on both western and Chinese Astrology. She has been dubbed the "High Priestess" of both Chinese & Western Astrologies by her readers and critics from around the world. All of Suzanne White's books remain in print and all are available as e-books. Since 1995, White has been a continued presence on the Internet, at first working for both AOL and Disney sites. In 2001, she started her own web site . This most original and amusing web site has been an enormous success and given Suzanne White's name even more global recognition than she previously enjoyed.
SUZANNE WHITE is available for personal consultations, chart readings and relationship evaluations. Get in touch with Suzanne directly at her personal email address: suzanwhite@aol.com

The New Astrology™
If you never cared for astrology, here's the book for you.. White blends the world's two most pervasive astrologies, marries Leo with Dog and comes up with a Leo/Dog - who (it turns out) it nothing like a Libra/Dog or an Aries/Dog. 700 amusing, informative pages about the 144 "New" Astrology signs. The New Astrology™ hits the proverbial nail on its head so many times, you will be gobsmacked. 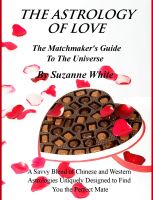 You have subscribed to alerts for Suzanne White.

You have been added to Suzanne White's favorite list.

You can also sign-up to receive email notifications whenever Suzanne White releases a new book.