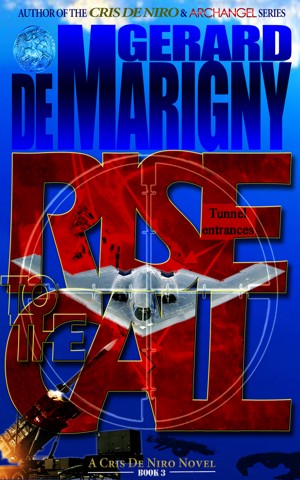 By Gerard de Marigny
Rated 5.00/5 based on 1 reviews
Iranian bio-terrorism, Russian espionage reaching into the White House, and the prospect of Iran emerging as a nuclear power are the threats. World War III could break out in the Middle East unless Cris De Niro & The Watchman Agency can Rise to the Call …

From author Gerard de Marigny, creator of the #1 Amazon-Bestselling Geopolitical CRIS DE NIRO thriller series! More
A U.S. scientist assigned to a CIA-run, covert, overseas assignment goes missing. Meanwhile, while in Manhattan to ring the NY Stock Exchange bell, Cris De Niro is asked by the scientist’s father, a childhood friend of his, to investigate. De Niro and The Watchman Agency soon uncover a secret Iranian-Russian alliance with deadly intentions. Iranian bio-terrorism, Russian espionage reaching into the White House, and the prospect of Iran emerging as a nuclear power are the threats. World War III could break out in the Middle East unless De Niro & Company can Rise to the Call …

I have always enjoyed thrillers with a geopolitical overtone and “Rise of the Call” has definitely given me hours of enjoyment. This story is a wonderful and exciting journey into the world of terrorists and the forces that try to stay one step ahead of them. The key to making book 3 the best so far is definitely the colourful characterization and fast moving action scenes that are peppered with oodles of suspense.

Although the story is fictional, the novel illustrates in a very dramatic manner what could happen when evil threatens world peace and the beliefs of a minority overshadow the welfare of mankind in general. The threats are so realistically portrayed they are guaranteed to increase you heart rate, a scary thought if you stop to think about it. The men from The Watchman Agency are faced with a barrage of circumstances alarmingly similar to events of recent decades.

In a few words, “Rise of the Call” opens with Cris, founder and leader of the Watchman Agency, invited to ring the opening bell at the NY Stock Exchange. While en route, he meets a childhood friend who asks for his help in finding his son, a nuclear scientist, working on a secret project for the CIA. He has not been heard from him for quite some time and he is worried sick something drastic has happened. Cris’s decision is a no brainer it is exactly why he created the Agency. The trail eventually leads his team to an Iranian terrorist plot inside the Unites States and a major threat facing the Middle East with Israel the epicentre of a nuclear war.

In one of the multiple threads we see the personal side of two of the members, a relationship that is slowly developing and I am sure the author has something up his sleeves for the future.

I hope I have piqued your interest in this exciting thriller. It has been a great series so far and I am looking forward to reading book 4, “Project 111”.

You have subscribed to alerts for Gerard de Marigny.

You have been added to Gerard de Marigny's favorite list.

You can also sign-up to receive email notifications whenever Gerard de Marigny releases a new book.