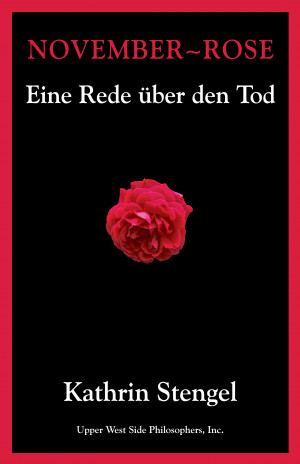 Kathrin Stengel, Ph.D., cofounder and president of Upper West Side Philosophers, Inc., Studio & Publishing, studied philosophy at the Universities of Leuven (Belgium), Munich, and Konstanz (Germany). She has taught philosophy at Seattle University and the Rhode Island School of Design, and has published widely on ethics, aesthetics and epistemology, including "Yoga for the Mind: A New Ethic for Thinking and Being & Meridians of Thought" (with Michael Eskin) and "Das Subjekt als Grenze" (The Subject as Threshold) — a comparative study on Ludwig Wittgenstein’s philosophy of language and Maurice Merleau-Ponty’s philosophy of perception. Her book "November Rose: A Speech on Death" — a philosophical meditation on loss, grief, and survival — has won the 2008 Independent Publisher Book Award. A frequent guest on radio programs throughout the US and Europe, Kathrin Stengel has designed and organized international philosophical events, including ‘What is Space? A Philosophical Inquiry into Space and the Imagination’, ‘About Style: A Philosophical Meditation on the Question of Style’, and ‘On Imagination: A Philosophical Studio’ (all three at the Rhode Island School of Design), as well as ‘Thinking and Experiencing Space’ (Germany), ‘Philosophical Walks with Nietzsche’ (Switzerland), ‘Pain and Beauty in Philosophy and the Arts’ (Seattle University), and ‘Image and Music: Improvisations on the 14 Stations’ for the Interfaith Assembly for Homelessness and Housing in New York City, video documentation of which was on display at the Brooklyn Museum of Art in 2005. For many years, Kathrin has also taught Vipassana Meditation. She lives in Manhattan with her husband and three sons.

You have subscribed to alerts for Kathrin Stengel.

You have been added to Kathrin Stengel's favorite list.

You can also sign-up to receive email notifications whenever Kathrin Stengel releases a new book.