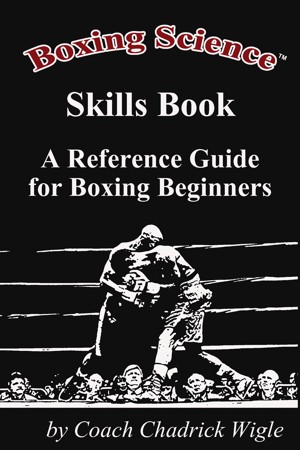 By Chadrick Wigle
This boxing “Reference Guide for Beginners” is complete with skill descriptions, variations and “coach tips”. Easy to use on your smart phone, tablet or computer, this book is full of valuable information that is only a click away to perfecting and fine tuning your boxing skill knowledge. It is a must read for any boxer, coach or parent of someone interested in the sport and/or activity of boxing. More
The “Boxing Science™ Skills Book – Reference Guide for Beginners”, is an easy to use resource for coaches, parents, and boxers of all skill levels and experience. You will easily find answers to your boxing skill questions on your smart phone, computer, reading device or tablet. There are 4 “positions” used in the Boxing Science™ Philosophy; Self, Partner/Opponent, Environment, and Judges. This eBook is the fundamental resource for the first position of Self.
Download: epub mobi (Kindle) pdf more Online Reader
rtf lrf pdb txt
Price: Free! USD
Add to Library
Create Widget
Tags: fitness exercise health youth how to howto activity boxing mma mixed martial arts
About Chadrick Wigle

Chadrick Wigle has recently returned to the American Southwest where he has developed a Team Building/Leadership Workshop for Business, Recreational and Therapy Groups. He has also started an amateur boxing team at the R1 MMA Gym for after school youth in Inglewood, CA; the City of Champions.

Chadrick had grown up in Kingsville, Ontario; Canada’s most southern inland tip. Not knowing that his decision, at 18 years old, to join the local boxing gym, would be a life altering choice that he would never turn back to regret. He had a few amateur bouts en route to a coaching career that had begun in the spring of 1992. He would spend the next 10 years learning as much as he could, absorbing as much as possible from all of the phenomenal trainers that he had in peers and mentors from the rich Detroit, MI/Windsor, ON area.

In 2005 Chadrick moved from Canada to Los Angeles to coach boxing at the legendary R1 Gym (the formerly known rAw Team) where he worked as the standup coach, corner-man and cut-man for elite Mixed Martial Artists Frank Trigg and Vladimir Matyushenko. While training in Hollywood, CA in 2007 he was fortunate to meet and start working with Biggest Loser’s famed Black Team trainer Jillian Michaels. With a powerful bond between them Chadrick assisted her to winning seasons 5, 7 and 11 of the ground breaking and influentially popular reality show, including personally working with BL’s first female winner Ali Vincent.

Chadrick entered the official “health industry” as a travelling phlebotomist and health educator for the health screening companies Worksite Health and Staywell. He appreciated the opportunity to see every corner of the United States, from Florida to Alaska, Oregon to Connecticut. The experiences were good but he missed his love of coaching and that’s why he’s returned to Los Angeles. This is where he has decided to begin rejuvenating the sport of boxing through Boxing Science USA, the trainer education company he founded with business partners Vince Camacho and Ann Taylor Lashbrook. 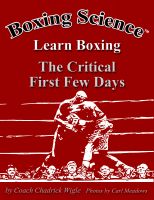 You have subscribed to alerts for Chadrick Wigle.

You have been added to Chadrick Wigle's favorite list.

You can also sign-up to receive email notifications whenever Chadrick Wigle releases a new book.