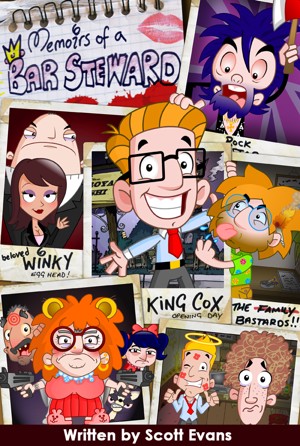 Memoirs of a Bar Steward part 1: 14th-25th August: From the city to inside the Queens Legs

Rated 4.00/5 based on 9 reviews
Where did it all go wrong for 18 year old Jacob Cox? His family business has been blown up with all of his new customers in it and he doesn't know who is to blame. Was it his ex gangster mother, his debt ridden father, his crazy brother, his evil little sister, the rival landlord he framed, the celebrity who wants bloody revenge or many of the other people he and his family has managed to piss off

My name is Scott Evans and I am the author of Memoirs of a bar steward, a story that is loosely based on and inspired by my own life at the very start of the 21st Century. In the year 2000 I was 18 years old and moved, with my family and some friends, from the city of Birmingham to Torquay in the southwest of Devon. My family had just bought the lease of a public house that over looked the sea and I was its licensee, the youngest licensee in the country at that time. I should had gone to university, I had passed all of my A levels, but presented with the opportunity to run a lively pub in a busy seaside town I opted to do that instead. Was it the right choice? Probably not. Do I regret it? Not at all. I had a great couple of years and it was where I met my future wife and now I have two beautiful children and a very good life. It was when I was working in the pub that I first started writing. After watching the first Lord of the Rings movie at the cinema I read the book, which was the book that made me fall in love with reading. So during the grave yard shifts during the day when not many customers came in, I began thinking up stories of my own. My first story was a fantasy, one about the after life and a epic journey, but more importantly the start of it was about a young man who had moved to a seaside town, and it was this segment that I later went on and developed into a full comedy story all of its own. For Memoirs of a bar steward I drew on my own experiences and knowledge of a young person running a pub. The characters in my book are inspired by people I have met and my friends and family, however whereas my character Jacob Cox is troubled by virtually everyone he knows and is related to, I am happy to say I have a wonderful, if a little eccentric group of family and friends. If you read my book you might like to know that a lot of the incidences in it are largely based on real events, while others are only based a little on events I have experienced but I will leave you to wonder which could be based on truth or are completely fictional. I am always happy to answer questions and if you would like to get in touch you can do at scott.evans@live.co.uk Thank you. I hope you enjoy my work.

Very very funny, and i loved all humor. The characters great.

Adrian Mole meets Shameless. Scott Evans adds a twist on his own youthful experiences and makes the Cox family an endearing bunch who wouldn't look out of place on Jeremy Kyle. The innuendo is hilariously obvious just like your average 18 year old the characters are well formed and we can all say we know a Jacob. Would love to see this published with more illustrations, or even animated. I loved it and a want more hurry up Scott your readers await with baited breath. Scott Evans one to watch!!!

This was so funny, I loved all the terrible things that happened not only to the main character, but also to all of the other character too. Proper laugh out loud stuff, I can't wait for part 2 to come out.

Great read but isnt finished which is really annoying!!!

Based on the life of the author, Scott Evans, Memoirs of a Bar Steward is a hilarious account of Jacob Cox and his family moving to a seaside town in Ireland. Jacob is convinced he lives among a bunch of lunatics and after passing his A-levels, he wants nothing more than to get away from his crazy family. Through a sudden turn of events, he is named the licensee of a pub his father has bought. Jacob sees this as the event that will be the making of him, so he pitches college and moves with his family to prepare to take on the task of running his “classy establishment.”

Jacob’s ego is awesome. He’s convinced he’s God’s gift to the people of Torquay, come to deliver them from their lower class ways into a more high end lifestyle. He’s sure that his family will ruin his pub, and is determined to keep out the commoners and cater to the more civilized populace. He’s completely oblivious to the fact that he’s incredibly arrogant, and is confused when people seem to be put off by the things he says. Jacob’s delusions of grandeur and total lack of social etiquette are so cringe-worthy that you can’t help but laugh! Needless to say, his attitude gets him into a never-ending slew of trouble with his family and the locals (let’s just say there’s public humiliation and the Irish mafia involved).

The language is colorful, but adds an incredible amount of personality to the writing. When you read it, it flows more like a natural thought process than a narrative, which I personally think is fantastic! I had a professor tell me once that I write the way I speak (which apparently isn’t professional), but I think that it helps to convey a larger amount of emotion and personal touch to the writing.

Mind you, this is not a book for your kid! This story is chock full of double-entendres and sexual innuendos (my personal favorite was the bit about the Queens Legs on p. 43). The language can be quite foul at times, and even crude at parts, but I think it gives a lot of validity to the fact that it’s from the perspective of an 18 year old. Ironically, even though Jacob considers himself the most respectable person in his family, he often finds himself in worse trouble than his brothers. This book explores all sorts of life experiences, from work and family to sex and drinking. Knowing that this story is loosely based on the life of the author, one can’t help but wonder just how much of this story is fact (ouch!), and how much is fiction.

Memoirs of a Bar Steward is an interesting concept- it’s written in the form of blog posts and emails following the fictional life of Jacob Cox as he and his family move to a new town and open up their own pub. This book is incredibly entertaining and is guaranteed to give you a laugh, but unfortunately I can’t bring myself to rate it higher than a 3/5. My reason for doing this is because it’s essentially unfinished. It’s only 47 pages long, and at the end, you’re left with a cliffhanger and a link to the fictional blog, where you can read the latest entries. I think that the finished product will be awesome, and the story itself is incredibly entertaining, but I think the author should hold off on publishing until the story is complete.That said, it’s free, and will definitely give you a good laugh, so you should check it out!

You have subscribed to alerts for Scott Evans.

You have been added to Scott Evans's favorite list.

You can also sign-up to receive email notifications whenever Scott Evans releases a new book.