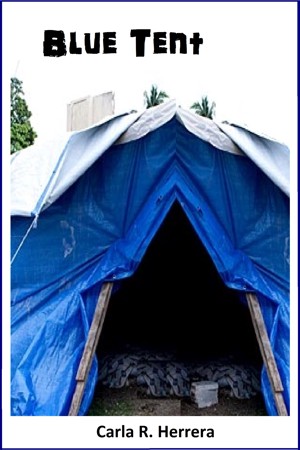 Rated 4.50/5 based on 2 reviews
In the not too distant future, The United States has become the Corporate States of America. Half the population is homeless and live in tent cities or camps.

In a new city, Tele hopes to put some of a painful past to rest. She's changed her name and her occupation and with some luck she'll disappear from the radar of corporate agents. More
"Blue Tent ends on a particularly brutal knife twist. It’s certainly brave, and maybe much too negative for readers who like to be coddled, comforted and reassured at the end of a story, but it leaves a far bigger impression. Therefore, if you like your speculative fiction well-described and yet remarkably bleak, Blue Tent is a real, and altogether rare, gem." --Paul Wilks, The Future Fire.

In the not too distant future, The United States has become the Corporate States of America. Half the population is homeless and live in tent cities or camps.

Tele is a scavenger. One of the many roaming rag and bone population looking for something better and living off the remnants of a consumer culture. A loner, she trusts no one, for good reason.

In a new city, Tele hopes to put some of a painful past to rest. She's changed her name and her occupation and with some luck she'll disappear from the radar of corporate agents.

A type of amnesia has swept the country. Children travel in savage packs preying upon the more vulnerable population.

Oldsters fend off thieves and women are in constant fear of abuse and no one seems to know where their former lives have disappeared to.

Few will speak against a corrupt ruling body, but then someone dies from scavenged food, an idea is born and Tele ends up on the fringe of a beginning movement and in fear of being discovered again.

You can see some of my artwork on Redbubble and support an indie artist:
https://www.redbubble.com/people/crherrera/shop

This is an excellent read. I think the premise is a very cogent one and even a very real risk in the modern world. There is aleady a movement that is originating from America and infecting globally whereby people are being persuaded to believe that (as the coin termed "big government") is not in their interests and that the regulatory capacity of governments should be privatized. It is the ultimate grizzly end to the death of 1-human-1-vote representation towards the unfair and lopsided form of representation that can be bought by money. My word for it is "capitocracy" and your book highlights the truth that this is just another form of feudalism. The book is entertaining and concise but my only criticism is that the action sequences seemed a little bit one-dimensional (ie. the fight sequences.) The ending is brutal and fully demonstrates the destitution of the human spirit where protective self-interest is the primary motivating factor. Carla, I am also a writer of dystopia works and I would love it if you read "War of Civlar" which deals in another great peril facing our world which is the polarization of cultures. Thanks for writing this book!

One of the things that annoys me about most dystopias is the way they usually just start from a blank slate. They'll wipe out everybody on the planet except for a handful of white, english-speaking young people and take it from there. Often, the back story of 'how we got there' is treated pretty lightly, leaping right over the realities of the struggles and the suffering that had to occur, but it simply isn't that easy to get from here to there. Even the Black Death killed only about a third of the population of Europe, and those who died suffered horribly while those who survived were devastated in many ways. There's no great 'survival of the fittest', 'uberman-libertarian' stuff going on. It's miserable and hard and there are no shortcuts through it.

If you want to know what dystopias are really like in this world, you need look no farther than countries in the midst of civil war. In such conditions, the lowest of the low are kicked the hardest while the strong dominate with ferocity and terror, and they, the strong, are also the rich, meaning those who are rich now, not you or me in our Horatio Alger fantasies. The rest of the people, the ninety nine percent as it were, are those who are going to feel the pain. The only way out for them is to band together and fight, but such unity is difficult to come by and the fight is often to the death. Divide and conquer is a proven ruling methodology, and so is outright brutality. You can witness the former first hand right now through the phony 'red states' versus 'blue states' in the USA, when conditions are not even so bad, and the latter, as of this writing, in places like Syria.

Imagine, then, that the current trends towards greater inequality and higher base levels of unemployment and permanent underemployment of the youth continue on the course they're on now. The next Great Depression is going to look different from the last, but who wants to think about it? We don't see it in our fiction or in our films. We'd rather blow right past all this reality stuff and get to the wild primordial wilderness. But somebody's got to tell it like it is, or rather, how it could be. We've relied in the past on books like this - "1984", for example, or "A Handmaid's Tale", or "It Can't Happen Here". They are rare enough, but stories that reflect the way we're headed as in a truth-telling mirror are often startling and stunning. "Blue Tent" is like this.

It's a powerful story, one that I felt in the pit of my stomach as I got to the end. The characters are vivid and more than believable, as are the settings and events. This is no "do-over dystopia". It's a real one. Highly recommended.

You have subscribed to alerts for Carla Herrera.

You have been added to Carla Herrera's favorite list.

You can also sign-up to receive email notifications whenever Carla Herrera releases a new book.