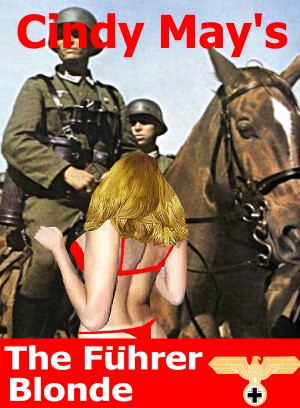 By Cindy May
Adult Taboo Erotica

Heidi’s wrote in her diary:-
“Just imagine that! The Führer has sympathy and understanding for me, and I am just his model. He told me to sit on an ornate chair and to drape my right leg over the arm at about a forty-five degree angle. For my left leg he told me to do the same. With my legs parted like this, I felt very exposed, but the Führer explained that as I am a natural blonde, my schamhaar, as he called my private hair, is especially pretty. Any pose that did not reveal my lovely hair would be an artistic disgrace. I realised he was looking upon me with the eye of a true artist. Isn’t this wonderful!”

A novel should entertain, but hopefully it makes the reader think. The Nazi regime was utterly evil, but Hitler had an uncanny magnetism that appealed to the young and especially to women and girls. This rarely comes across in academic studies, but I have tried to recapture that paradox with the lovely young actress, Heidi Felgner. Seduced by the randy Reich’s Minister of Propaganda, Joseph Goebbels who is known as “The Ram”, Heidi is later taken to Hitler’s Alpine retreat, the Berghof for a weekend of unrestrained sex. A few weeks later, Heidi discovers that she is pregnant!

Was Heidi Felgner a bad girl or a young woman who lived in difficult times? If you would condemn her, ask yourself this. Had you lived in those days, in a dictatorial regime where the slightest protest meant a concentration camp, would you have acted differently? Would you have been courageous and probably dead?

As her granddaughter, Liselotte reads Grandma Heidi’s diaries, the secret of her mama’s birth comes out. Later in the diaries she reads aghast about what happened in 1945 when the Red Army smashed its way into Berlin, and 100,000 German women from 8 to 80 heard the dreaded words, “Frau Komm” as the prelude to mass rape.

Shocked that she could be the granddaughter of the Führer, Lisel is too ashamed to admit the truth to anyone. A decade later, she is married to the Graf von Scheering and lives in a fairytale castle in Bavaria, but the strain of living a lie is too much and she confesses her pedigree to her husband.

Before the couple can come to terms with the shocking revelations, a naughty episode with her husband leaves her vulnerable to blackmail. Forced to travel to Hamburg, the pressures mount on Lisel to betray her marriage vows. Is she a bad girl or a victim?

Bestiality, gangbangs, watersports, rape, prostitution, striptease and romance swirl around grandmother and granddaughter in their turbulent lives, but the “The Führer Blonde” is more than just a racy story.

Because we demonise Hitler and the German people, we shut our eyes to history, but Heidi represents a generation of young women who believed passionately in their Führer. To Heidi, sleeping with the Führer was an honour. Was she a slut or a victim of the times? I have my opinion. What you think is up to you.

We rightly condemn the Nazis atrocities towards the Jews, Poles, Slavs, and many other groups, but the rape of two million German women in 1945 is not given the same status, but a war crime is a crime regardless of the identity of the victim.
Available ebook formats: epub mobi pdf lrf pdb html
First 20% Sample: epub mobi (Kindle) lrf more Online Reader
pdb
Price: $3.99 USD
Buy Add to Library Give as a Gift
How gifting works
Create Widget
Tags: prostitute striptease cindy may coerced sex hitler sex pissing games random sex girl dog sex girl horse sex married whore
About Cindy May

Hi,
All the advice is that I'm supposed to write a profile, but I find it a lot easier to write about the characters in my novels than about me. If I write it one way it sounds so boring that I wouldn't read it, so why inflict it on you. If I do it the other way, it sounds as if I think there are only two good authors in history, me and Will Shakespeare, and that is worse. There are at least three good authors ! (joke)

When I have read bios from other authors, I'm not too concerned with where they went to school, what their favorite color is or whether they are 4 feet tall or 8 feet tall. I want to know "what makes them tick" and "What is it that they are trying to say?" The average bio just does not tell me, and I'm not sure if I know how to say it, so I'd prefer to let my characters talk for me.

Maybe the best bet is to tell you what and why I write. Well, first off, I enjoy doing it, so even if you hate my books, there is one person that likes 'em - me! I have read a cross section of literature over the years. In most genres there is plenty of variety, and that makes a book or a film good, as you don't know what will happen. I recall reading one novel and there was a subplot with a cute Chinese gal. I wondered if she was going to make it to the end of the story or not. At various times, it looked bad for her, and in the end I was more concerned about her than the main plot.

With most "Romance", the plot is 'girl meets boy; girl loses boy, girl regains boy'. If there is a good girl/bad girl battle, you know on page ONE which is which, so you know what will happen on p336. All that the other 334 pages do is to fill in the precise details.

With erotica, the sex can be much steamier, and the HEA (Happy Ever After) is not necessary, but the girls are often just a system to transport the sexy bits from one bed to the next bed. That is degrading to women, and it stinks! I even saw a review where the reviewer PRAISED the lack of character development or plot. If the review was fair, then I do not think I would care much for that book.

People are not self-propelled sex organs seeking another organ. They have all sorts of hopes, fears, desires, hang-ups, and that is what makes us act as we do. I wanted real people to inhabit my novels. I wanted Mary Beth and Kitty, Lady Annabelle and Mavis, Tanya, Svetlana, Abby, Tracy and Phoebe to be people you can relate to, and even think, “Yeah, I knew someone like that.”

I guess another influence that impelled me to write is that there are things I feel strongly about. In the US, one phrase that gets me real mad is “trailer trash”. Someone may come from a poor background and live in grim surroundings, but that does not automatically make them trash to be despised. There are plenty of nasty people to be found in such circumstances, but you can find nasty people in the most luxurious penthouse as well. Has anyone written about a Penthouse Pig?In “Gold Medal Momma”, there is a Trailer park gal. Does she deserve to be called trash?

In the UK there are similar phrases. In “The Lady and the Slut” the yawning gap between a gal who is the daughter of the Manor House and a gal whose mum was the village slut is central to the story. “Three Brides and One Guy” opens just after the collapse of the Soviet Union, and recalls the horrific ethnic cleansing in Chechnya where Russian families fled or died. Those that fled back to Russia faced discrimination. "Three Brides" explored a whole host of issues.

In "The Slutlets Get Mad", the Conroy twins, Tracy and Phoebe take center stage in a sexy action packed tale set in the Cotswolds and Moscow with an explosive finale. There's plenty of sex, plenty of adventure and a chance to get to know Abby and her two daughters better.

'Even When You Lie' and its Sequel. 'Cotcote Babes' enter the world of office politics, office sex and the notorious Christmas Party. An interracial affair kicks off between an Asian girl and an English guy, but soon they must run for their lives from an Honour Killing. Add a gold digger who sets out to nail the boss and a gal whose mom dumped her like a carton from a fast food meal when she was five and the there is a heady mix of sex, love, lust, betrayal and drama.

'Once Upon an Office' depicts the self-contaied world of office politics and office sex.

By highlighting these issues in a novel, I can say "Hey, what about this?" To take the easiest one, we all know that phrase "trailer trash", but people are NOT trash because of where they live. PERIOD. I would apply the trash label to the person who thinks of another human being in those terms, as it is nasty and unfair. OK, I guess I'd better calm down!

If you decide to read one of my novels, I hope that YOU will ask yourself a few questions at the end of it. The characters are imaginary, but the problems they face are real, and real people face them every single day.

Often the emotional baggage that the characters carry, or the way other people react to them, determines what will happen. I do kind of like a story where someone from the wrong side of the tracks makes good in the end, and I don’t like a story where the bad guy or bad girl are top of the compost heap on the last page.

I'd like to say a big thanks to the kind folks who added me to their favorite authors list. That was much appreciated. Some are readers and that is real nice. Some are authors, and it is nice that we can appreciate one another's work.

It is also a change from the author bashing that the "Thought Police" engage in on certain sites. Why in tarnation should we be nasty to one another? I just don't see what the folks that do it can get out of it.

If you want to find out about my novels type in Cindy May in a search engine or on Smashwords, Amazon etc, and you should find a link

I have a website on Google with a write up on my books and a few personal thoughts etc. 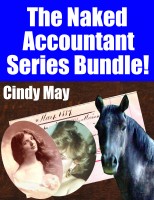 Reviews of The Fuhrer Blonde by Cindy May

You have subscribed to Smashwords Alerts new release notifications for Cindy May.

You have been added to Cindy May's favorite list.

You can also sign-up to receive email notifications whenever Cindy May releases a new book.