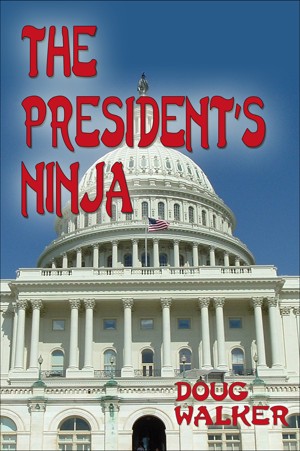 Doug Walker is an Ohio University, Athens, Ohio, journalism graduate. He served on metropolitan newspapers, mostly in Ohio, for twenty years, as political reporter, both local and statehouse, along with stints as city editor and Washington correspondent. Teaching English in Japan, China and Eastern Europe were retirement activities.
His first novel was “Murder on the French Broad,” published in 2010.
Now occupying an old house in Asheville, NC, with his wife, he enjoys reading, tennis, short walks, TV and writing.

In its most basic elements, this book is about a man simply trying to do his job and mend broken fences with his son. However, set against the back drop of the gravity of life in the White House, and, well, a ninja, it makes for a very enjoyable, sometimes surreal, read. I would recommend this book to others.

Terrorists make the mistake of killing the vice president instead of the president. Thank God the president has a ninja on staff -- an American who was raised by a Japanese ninja, the last of the line. Take a trip into White House politics, romance and double dealing with this riveting read. You won't believe where the path leads.
Kato Wolfe --

You have subscribed to alerts for Doug Walker.

You have been added to Doug Walker's favorite list.

You can also sign-up to receive email notifications whenever Doug Walker releases a new book.