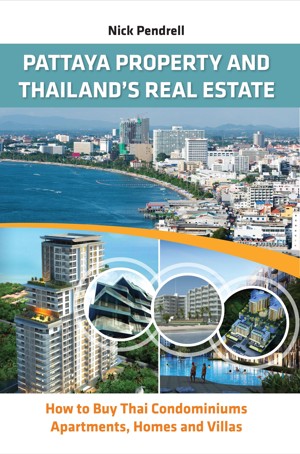 Written for both investors and those looking for a holiday home or permanent residence in the Pattaya, Thailand, the book is written in a light and easy-to-read style, covers nearly 50 developments and guides the reader through the entire process of purchasing real estate in the city through until the legal registration of the property. More
*2013 Edition - Fully Revised and Updated as of April 2013*

Welcome to Thailand – the Land of Smiles!

With its warm, tropical climate, exotic landscapes, crystal blue seas, golden sandy beaches, welcoming people, delicious cuisine, array of entertainment options and affordable prices, it’s easy to fall in love with Thailand. So it’s hardly surprising that Thailand has become one of the world’s most popular tourist destinations, attracting 20 million tourists from all over the world every year. And the most popular resort city of all is …

Pattaya – Where the World Comes to Relax and Play

For most of these visitors, one trip to Pattaya is just not enough – many dream of either relocating to the city permanently or buying a second home here to escape the winter blues. Until recently, purchasing freehold real estate in Thailand was impossible and the only alternatives – either buying leasehold or owning as a minority shareholder in a Thai company - were a major turn off. But following an amendment to the Condominium Act in 2008, it’s now possible for anyone to buy a condominium in Thailand – and it’s theirs for keeps!

Currently condominiums in Pattaya start from under £20,000/$30,000. But prices aren’t going to stay this affordable for much longer – they’re starting to rise fast. So the right time to buy is right now.

In this book, overseas property expert, Nick Pendrell, provides a detailed, but easy to read, buyer’s guide for anyone interested in purchasing real estate in Pattaya. It will take you through the buying process from start to finish, helping you to select your perfect property for the best possible price, avoiding any potential pitfalls along the way.

This version of the book is especially enhanced for e-readers, featuring more than 90 images, tables and maps in addition to over 60,000 words of text to provide the most-detailed buyer's guide ever produced on the market.

Nick Pendrell was born in Stratford-upon-Avon where he went to the same school as William Shakespeare (although a few centuries after Shakespeare had already left).

In the late-eighties, he came to prominence in the UK video industry, responsible for creating the marketing campaigns for such blockbusters as Terminator 2, Basic Instinct and Dances With Wolves.

Always having suffered with wanderlust, he moved to Prague in 1991 where he formed two successful companies, including a magazine publishing company, which he later sold in order to concentrate on his new great interest - the area of internet marketing.

After experimenting with writing and publishing ebooks in 2001 he moved to Latvia in 2004 as marketing consultant for several different internet companies.

In 2007, he published his first book - 'Propertastic's Complete Guide to Hurghada Property and Egypt's Red Sea Real Estate' after seeing the potential of the property market

In 2011, he returned to writing, starting work on the 'Internet Marketing Bible' series of books, empowering local businesses with the tools to harness the promotional power of the internet in order to market themselves in a cost-effective manner. The first title in the series, 'Internet Marketing Bible for Accountants' was published on 3 January 2012.

In mid-2012, he returned to writing on the subject of international real estate with the publication of 'Pattaya Property and Thailand's Real Estate', published in July 2012.

In addition to books, Nick regularly writes articles for a diverse selection of international professional magazines ranging from 'Computer & Video Games' through several international real estate magazines to 'Accounting Practice' magazine, where he writes a regular column on internet marketing.

Review
Jeff Wilken reviewed on May 28, 2013
(no rating)
I market Thai real estate and specialise in Pattaya and Hua Hin. I find this book invaluable in keeping current on the state of the market and the procedures in buying property. I recommend it to all by buyers. It is truly a MUST HAVE. Cheers Jeff Wilken

(reviewed the day of purchase)
Michel Horat reviewed on May 28, 2013
(no rating)
This book is all you need. Read it in one or two days and you will know even more than 90% of the pack that already owns their Pattaya home. Concise and precise. A Must!

(reviewed the day of purchase)
Vladimir Doguilev reviewed on Jan. 13, 2013
(no rating)
Information was very usefull to read in preparation for negotiations: saved my time on arrival in Thailand. One condo already in my ownership. Need much the same about Myanmar and Cambodia.

You have subscribed to alerts for Nick Pendrell.

You have been added to Nick Pendrell's favorite list.

You can also sign-up to receive email notifications whenever Nick Pendrell releases a new book.