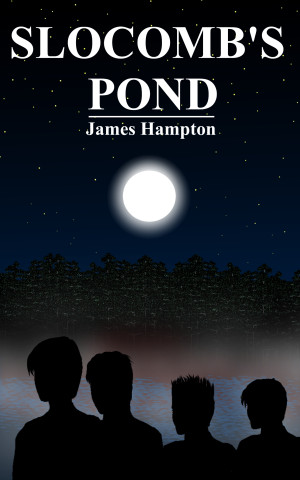 By James Hampton
Rated 5.00/5 based on 5 reviews
Slocomb's Pond has a bad reputation. Some people have returned from it with tales of hideous creatures living beneath its placid waters. Others have not returned at all. This is the story of four boys who, one winter night, decide to tempt Fate at Slocomb's Pond, and who are caught most unaware when Fate takes them up on their wager.
Download: epub mobi (Kindle) lrf Online Reader
Price: Free! USD
Add to Library
Create Widget
Tags: horror dark fantasy monster creatures monsters creature
About James Hampton

James Hampton is a writer primarily of science fiction and fantasy stories, although he enjoys writing, and reading, in a wide variety of genres.

I really like this story. I was hooked from the beginning to the end. It was great. I even told myself after reading the book that if I ever have to flee from someone or angry animal to Not climb a tree or suffer the consequences...

Another great work of story telling

Well, James Hampton has bottled lightning at least twice. I really enjoyed his "Letters To A File" story, and chose "Slocombe's Pond" for my next read; again, what a great story.

The tale consists of a group of kids - one of whom is the narrator - who are undergoing a rite of passage, an initiation into teenage-years, of spending some time standing, covered in animal blood and chicken guts, in Slocombe's Pond, a dark and scary place where people have dissapeared amid rumours of monsters.

The story drew me in from the first few paragraphs, and I enjoyed reading the carefully-crafted prose. Earlier that day, I had once again found myself struggling to really get into a story I was reading, a story in a proper, published book. I often think it's me, that I'm not giving the story enough attention, that my mind's going fuzzy, that I'm losing the ability to visualise what I'm reading. But then when a story comes along such as "Slocombe's Pond" and reading becomes effortless and highly enjoyable, I thank writers like James Hampton for assuring me that I'm not losing my brain.

There is no question this is a 5-star story. It's pretty long but never flags, is realistic, believable, full of mystery and has a satisfying ending. The stuff with the kids is evocative of Stephen Kings "It!" or "The Body", and the monsters are more credible for not being too outlandish.

The writing is great; good easy-to-read prose which never breaks the hold on the story; one particular sentence, I liked, clever and well done was "Maybe one patch of forest at least was rooting for us to survive.", but to really understand what that's all about, you'd have to read the story.

Just to be complete, there were one or two very minor niggles; at one point in the story there are seven characters in a scene, and they, only slightly, got a bit muddled in my head. And the title is great, I wouldn't change it, but sometimes I couldn't get out of my head the TV series "Are You Being Served", and thinking about Mrs. Slocombe's Pussy!!! [but that's probably just me]

In short, I loved it and would reccomend it to everyone. I will be reading more of James Hampton's work when time allows.

Wow. Another great story to be told sitting around a campfire. Kept me wondering at each turn what the secret was. As the story came to a close, I had those delicious chills running up and down my spine.

You have subscribed to alerts for James Hampton.

You have been added to James Hampton's favorite list.

You can also sign-up to receive email notifications whenever James Hampton releases a new book.