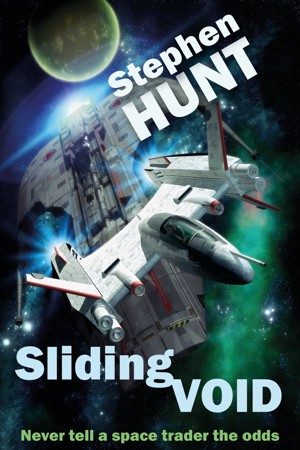 By Stephen Hunt
Rated 4.00/5 based on 4 reviews
Captain Lana Fiveworlds has a hell of a lot of problems. She's sliding void in an ageing seven-hundred-year-old space ship, scrabbling around the edges of civilised space trying to find a cargo lucrative enough to pay her bills without proving so risky that it'll kill her. More
DESCRIPTION

Captain Lana Fiveworlds has a hell of a lot of problems.

She's sliding void in an ageing seven-hundred-year-old space ship, scrabbling around the edges of civilised space trying to find a cargo lucrative enough to pay her bills without proving so risky that it'll kill her. She's got an alien religious freak for a navigator, an untrustworthy android for a first mate, a disgraced lizard for a trade negotiator and a deserter from the fleet acting as her chief engineer.

And that was well before an ex-crewman turns up wanting Lana to rescue a barbarian prince from a long-failed colony world.

Unfortunately for Lana, the problems she doesn't know about are even more dangerous. In fact, they just might be enough to destroy Lana's rickety but much-loved vessel, the Gravity Rose, and jettison her and her crew into the void without a spacesuit.

But there's one thing you can never tell an independent space trader. That's the odds...

‘Hunt's imagination is probably visible from space. He scatters concepts that other writers would mine for a trilogy like chocolate-bar wrappers.’
- TOM HOLT

‘All manner of bizarre and fantastical extravagance.’
- DAILY MAIL

‘Compulsive reading for all ages.’
- GUARDIAN

‘Studded with invention.’
-THE INDENDENT

‘To say this book is action packed is almost an understatement… a wonderful escapist yarn!’
- INTERZONE

‘An inventive, ambitious work, full of wonders and marvels.’
- THE TIMES

‘Hunt knows what his audience like and gives it to them with a sardonic wit and carefully developed tension.’
- TIME OUT

‘A ripping yarn … the story pounds along… constant inventiveness keeps the reader hooked… the finale is a cracking succession of cliffhangers and surprise comebacks. Great fun.’
- SFX MAGAZINE

‘Put on your seatbelts for a frenetic cat and mouse encounter... an exciting tale.’
- SF REVU

THE SERIES SO FAR...

Stephen Hunt is a fantasy and science fiction author who lives in Spain and the UK. He is best known for his best-selling Jackelian fantasy series of novels from HarperCollins, also the publisher of J. R. R. Tolkien and C. S. Lewis in the UK.

The Jackelian world is a fantasy adventure set in a far-future Earth where the passage of time has erased almost all memory of our current world from history. Electricity is now unreliable and classed as a dark power, with many of the nations of the world existing at a Victorian level of development and relying on steam-power, mechanical nanotechnology and biotechnology to survive and prosper.

It is a world of strange creatures, flashing blades, steammen servants, airship battles and high adventure.

Each novel is written as a stand-alone work, but share the same world and many of the same characters who criss-cross between the novels (a technique shared with fellow British fantasy author Terry Pratchett and his Discworld series).

Stephen maintains his own web site over at www.StephenHunt.net and when he is not writing, he can be found indulging in such interests as cooking, gardening, collecting comic-books, and building his collections of genre novels.

Sliding Void
The void can make you rich. The void can kill you. Who'd be a starship captain?

Sliding void could be an adventure novel of the colonial age, with the captain of a cargo sailing ship, dealing with local kings who fight among them, with a cargo cult (read in wikipedia about it) taking the european traders and adventurers for magicians, and an exciting story weaved around them.
For us science fans, stephen hunt transferred the plot to outer space and eloquently describes the power of sailing the monsoon, eh, the artificial wormholes leading through hyperspace, the black powder cannons, er, the multiple nukes which are shot at said trading vessel, making a very inspiring story of the inhabitant of an pre-technological planet, which has been forced by circumstances to become a crew member of a 40th century space ship.
This is enticing to read, and the quality of the book is good - no or almost no typos and errors, and there even is a TOC with real chapter titles.
Characters are a little bit on the cardboard side, the female captain being, of course, an attractive woman, the mail hero a real one, witty and battle tested, the slaves, sorry, androids are loyal and more intelligent than they want their owners to know, and said owners discussing if it is wise to teach the slaves to read, eh, sorry again, to enable real awareness in their androids.
So why the lowest possible rating from me? I normally do not award a rating at SF at all (reason see my profile). I write the reviews to help readers find good SF and authors find readers. Very seldom I do rate a SF book to warn readers, and that is the case here. I thougth Smashwords had a rule that the E-Books at their portal have to be a complete story and this one is'nt. From the 86 pages (measly enough, if you want to know my opinion), the last one, titled with "Chapter six", is advertising, "join the free ... group", and the plot does not begin before page 8, the previous pages filled with "for links to all these books, visit...", "Also by Stephen Hunt", "Praise for Stephen Hunt's Fiction" (three screens for scrolling with my Ebook-Reader" etc., making 77 real pages for reading. The story is not finished, it ends with the spaceship fleeing, being under deadly attack by a dangerous pursuer, and his previous ally on the planet overpowered, arrested and tortured, end of book, go clink out 2,99 Dollar for the sequel or register on the author's homepage with your precious e-mail-address for more promotion, pardon, "newsletters".
Want at least to have a look into the sequel before buying? The predominant .epub format from the first, free "book" (I would rather call it appetiser...) is not offered for the 20% sample of the sequel, only the amazon proprietary .mobi format. Go buy a kindle, Stephen Hunt has dozends of books on sale at amazon.com, not only the seven visible on Smashwords.
It is a pity. The "appetizer" was fun to read and the website of Stephen Hunt is interesting and entertaining, too.

Sliding Void by Stephen Hunt has it all, adventure, intrigue, space opera and fantasy all wrapped up in one book. The fast past novella will keep you glued to its pages from start to finish.

I really like the tale that Stephen Hunt developed. The storyline was well thought out and easy to get into. The nonstop action and plot twist made the story almost impossible to put down. I love this kind of action packed read.

The author did an excellent job of developing a cast of characters that were both real and very believable. I was soon caught up in their individual stories as the tale developed. The characters were great.

I really enjoyed Sliding Void by Stephen Hunt and I highly recommend this book to all readers.

One of the better SF books out today. The writer has managed to get in this book, what another author would take 4 times the pages. Crisp, action packed, plots, original ideas, ya ya ya. The moment I finished, I looked to see if book 2 was out and bought it. After reading so many ho hum books, this was like a flash of gold.

A very good read for fans of the space opera genre. It features the adventures of the crew of a starship as they try to make a living in the far future. By the sound of it, things don't improve from how they are today much!

You have subscribed to alerts for Stephen Hunt.

You have been added to Stephen Hunt's favorite list.

You can also sign-up to receive email notifications whenever Stephen Hunt releases a new book.