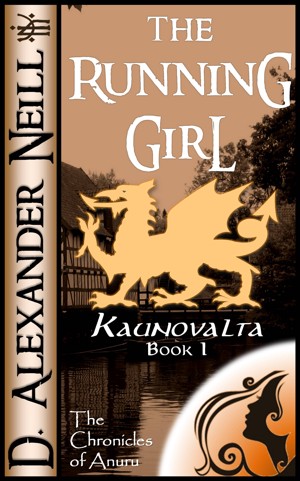 The Running Girl (Kaunovalta, Book I)

By D. Alexander Neill
Rated 4.67/5 based on 3 reviews
Ally of Eldisle bears twin burdens: a complicated heritage, and a penchant for finding herself in the wrong place at the wrong time. Faced with false accusations of treason and murder, she flees to foreign lands, finding enemies all around, friends in unexpected places, and wonders undreamed-of, and must come to terms with the meaning of a bloodline lost in the depths of antiquity. More
"Wonderful escapism. 5 stars! If you're looking to escape into another time and place then you will greatly enjoy this read." - 'Raven', NC, 14 May 2012

"Outstanding debut novel and a great new series. The author has created a complex yet highly enjoyable world...that I encourage more and more readers of fine fantasy to embrace...one that I cannot wait to enter again and again... Neill is a fresh new face and great addition to the fantasy genre. Five out of five stars for this debut novel." - 'Canuckreader', 15 July 2012

Ally of Eldisle, sword-thegn and sometime mage, bears twin burdens: a complicated heritage, and a penchant for finding herself in the wrong place at the wrong time. Faced with false accusations of treason and murder, she flees to foreign lands, finding enemies all around, friends in unexpected places, and wonders undreamed-of. While struggling to keep an ancient treasure out of unfriendly hands, she is forced to reconcile her preconceptions about the wider world and its myriad inhabitants with her own origins - and to come to terms with the meaning of a bloodline lost in the depths of antiquity, created by ancestors both inhuman and unknown, and with the awful powers they have bequeathed her.

D. Alexander Neill is the nom-de-plume of Donald A. Neill. A retired Army officer and strategic analyst, Don is a graduate of the Royal Military College of Canada (D.E.C. 1986 and BA 1989), the Norman Paterson School of International Affairs (MA 1991), and the University of Kent at Canterbury (Ph.D. 2006). He began writing fiction as a creative outlet in Grade 6, managing to overcome devastating reviews of his first novel, which he wrote in 2H pencil in seven taped-together college-ruled notebooks. He initially chose the fantasy genre because he was sucked into it at the age of 11 by the irresistible double sucker-punch of The Hobbit and Star Wars, never managed to escape, and eventually gave up trying. He intends to branch out into other fictional fields of endeavour, but will always return to Anuru, where – Allfather willing – there will always be at least one more story waiting to be told.

Don has been married for 20 years to a Valkyrie, and has two children, both of whom resemble her in temperament and, fortunately, looks.

Reviews of The Running Girl (Kaunovalta, Book I) by D. Alexander Neill

Thoroughly engrossing, I read it in one sitting :) Wonderful detailed scenes, humor, well rounded "history", engaging characters - a perfect blend of magic, heart, mystery :) I LOVE fantasy and while I may not have read "thousands", I have read my fair share and I think this book is brilliant! I may be in Nigeria, West Africa but I shall do all I can to buy every one of Mr. Neill's books I can get my hands on! You've got yourself a BIG fan Mr. Neill!

Running Girl is a pretty good debut novel. The book starts off at a nice pace with lots of action and many things happening. There is quite a bit of magic in the early going and some nice combat also.

Unfortunately, the author sometimes get so caught up in describing scenery that he forgets to tell a story. There are paragraph after paragraph of descriptive prose, wherein no action is taking place. This gets dull and sometimes drags his story to a halt. Once the protagonist, who has half a dozen names throughout the book, gets to dwarf land, the book basically stops so that the author can lovingly describe a typical steampunk setting.

However, the book is redeemed through cheerful banter between the various party members and some amusing word play in certain sections. My hope is that further novels limit the descritpive prose while the main character is basically inactive and gets on with telling the story. The book has made me interested enough to try one more book in the series. I have a concern though because the author wants to make 15 books in the same world. Unless he vastly, vastly upgrades the action, boredom will set in long before a satisfying conclusion is reached.

You have subscribed to Smashwords Alerts new release notifications for D. Alexander Neill.

You have been added to D. Alexander Neill's favorite list.

You can also sign-up to receive email notifications whenever D. Alexander Neill releases a new book.