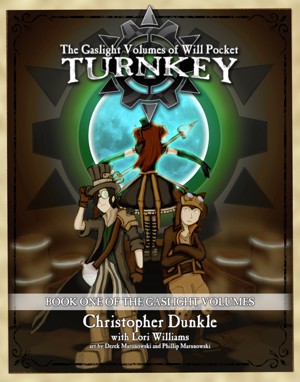 The Gaslight Volumes of Will Pocket: Vol I: Turnkey

By Christopher Dunkle
Rated 3.00/5 based on 1 reviews
A backward and booze-soaked spin on the steampunk model, Turnkey follows its cast of old-fashioned souls adrift in a new-fashioned world. A blend of self-deprecating humor, silly wit, white-knuckle adventure, old-fashioned romance, and bittersweet tragedy, Turnkey begins The Gaslight Volumes of Will Pocket with a resounding bang! More
Book I of the Gaslight Volumes of Will Pocket
By Christopher Dunkle

Illustrations by Derek and Phillip Marunowski

“You ever fall in love with the end of the world?”

Set in a reimagined England in the year 1888, Turnkey begins in the gilded metropolis of New London, the poster city of a socially-advanced, mechanically-propelled British empire. In this lavish city, orchestrated and built from the ground up by a reclusive industrialist who has ascended the throne, we find perhaps the only antiquated thing left in Europe…and he’s propping his head on a sticky bar top in the dead of night.

Ladies and gentlemen, Will Pocket.

A progressively-backward and perpetually-penniless daydreamer who has spent most of his nights in New London’s dreariest taverns, making company with warm beer and the warbling sounds sent out from the spinning wax on a dusty music box.

Our story begins on one such night. Having consumed far more beer than he can afford, the exhausted Pocket strikes a deal to friend and barman Alan Dandy to pay for rounds with a well-told story. What follows is a retelling of Pocket’s captivation with the Watchmaker’s Doll, a peculiar young lady crafted entirely out of ticking clockwork and beautiful synthetics. When the Doll is found and accidentally awakened from a mechanical slumber by Pocket and the fox-like cutpurse Kitt Sunner, they inadvertently spark a series of great troubles for not only the three of them, but for those whose paths they eventually cross: everyone from sky-sailing pirates and medicine peddlers to a teahouse mystic and a bulletproof gambler.

A backward and booze-soaked spin on the steampunk model, Turnkey follows its cast of old-fashioned souls adrift in a new-fashioned world. A blend of self-deprecating humor, silly wit, white-knuckle adventure, old-fashioned romance, and bittersweet tragedy, Turnkey begins The Gaslight Volumes of Will Pocket with a resounding bang!

Christopher Dunkle is a Florida native who's been feverishly scribbling words since he could hold a pen.

An award-winning, performed student playwright while in high school, Chris then moved on to publish short fiction before falling in love with the budding genre of steampunk and composing his first full novel.

Chris shares the page and his life with fiance and Gaslight Volumes series contributor, Lori Williams. When not working with Chris on the series, Lori is indulging her other talents as a skilled seamstress and cosplay model.

Consummate geeks, Chris and Lori live in Pensacola, Florida with an abundance of cats and a shared case of chronic insomnia. 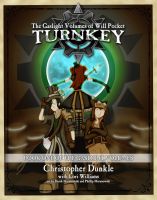 This book was an enjoyable read. The alternate history to explain the steampunk elements was convincing and once I'd got used to the interesting framing device for the first-person narrative the story flowed well, albeit with rather odd dream sequences. This tale is essentially a rolicking adventure-cum-romance, with the former handled better than the latter. There are some wonderfully bizarre characters in the mix, plus the usual steampunk airships and other weird and wonderful devices. Unfortunately, I failed to warm to Pocket, the 'hero' of the story, who acted the selfish cowardly idiot through much of the book - which is fine in the right context (George MacDonald Fraser's Harry Flashman or Terry Pratchett's Rincewind comes to mind), but it felt odd that such a character would have so many far more able people falling over themselves and risking their lives to help him at every turn. In that vein, the book makes too much use of chance to save the hero's neck. The other big problem I had was with 'New London', the descriptions of which show no attempt to relate it to the real London at all. London is not one of those cities where it is easy to obliterate the past (there's still bits the Romans left behind in the present-day version) and it would have been nice if the author had recognised this. Yet there are some fun adventures and some genuinely-hilarious moments in this book, so steampunk fans will find a lot to like. And the perforated spoon in the hat? I instantly thought it was a set-up for an 'absinth-minded' joke to appear at some point, but it didn't! One last little note on formatting - the wide line spacing looked odd on my Kobo and paragraph indents were occasionally missing, but no typos!

You have subscribed to alerts for Christopher Dunkle.

You have been added to Christopher Dunkle's favorite list.

You can also sign-up to receive email notifications whenever Christopher Dunkle releases a new book.