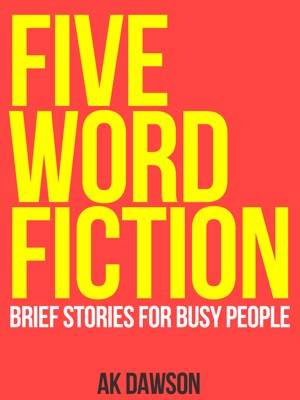 By AK Dawson
Rated 5.00/5 based on 1 reviews
Brief stories for busy people.
This collection contains 555 tales. All are of five words. More
This is a story collection.
All are of five words.
Why five words, you ask?
Well, six is conquered territory.
Four is far too short.
Five, you’ll find, is perfect.
Each one is a snapshot. (That’s like all stories, really. Beginnings result from deliberate decisions. Happily ever after is illusion.)
You’re thrown into each scene.
You’re given clues, signs, fragments.
Your imagination does the rest.
Read these for your enjoyment.
Or use them as inspiration.
There are 555 in here.
It’s all about the fives.
Download: epub mobi (Kindle) pdf more Online Reader
rtf lrf pdb txt
Price: Free! USD
Add to Library
Create Widget
Tags: fiction short stories flash fiction word flash five dawson flash fiction collection very short
About AK Dawson

Originally from South Africa, AK Dawson lives in Gateshead, in the North East of England. 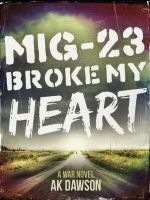 AK Dawson’s Five Word Fiction delivers exactly what it promises – brief stories for busy people.
Legend has it that Hemingway once won a bet by crafting a complete story, just six words long: ‘For sale: Baby shoes. Never worn.’ Setting aside that bet really took place – and whether Hemingway actually wrote the story, the general concept spawned the genre of flash fiction and Smith Magazine’s six-word memoirs. But AK Dawson takes it one step further, attempting – and succeeding with – five word fiction.
Some are ambiguous: “His silence said it all.” “That was all he had.” Others, chillingly specific. “The family stopped eating together.” My favourite: “Desk lamp. Battery. Pliers. Detainee”.
The stories span a variety of genres: quotes, post-scripts, pickup lines, obituaries, and what runs through one’s head during a parachute failure (before one’s unfortunate demise). Yet they all tell (or hint at) a complete story, and although Dawson says they’re stories for ‘busy people’, don’t let the small word count fool you. Five Word Fiction is not a book for skimming, but for pondering. If you have only a minutes or even seconds to spare between tedious tasks, Five Word Fiction will give you enough brain food to keep you going for far longer than your eyes are on the page.

You have subscribed to alerts for AK Dawson.

You have been added to AK Dawson's favorite list.

You can also sign-up to receive email notifications whenever AK Dawson releases a new book.