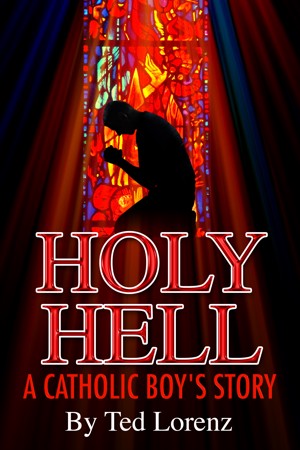 Ted Lorenz was born in Salinas, California in 1944. He graduated from college with a degree in Religious Education and quickly discovered that it was not a handy degree to possess. He began his career in New York City writing for Jerry Lewis Cinemas and drafting press releases for opera and concert stars. Ted produced shows at the legendary Upstairs at the Downstairs in New York and served as talent coordinator for the world famous Bitter End in Greenwich Village where he worked with stars such as Jay Leno and Billy Crystal as they launched their careers. Producing and directing credits include "W.C. Fields, 80 Proof" and the award winning Las Vegas show "Enter the Night." He has produced or directed shows that featured The Royal Philharmonic Orchestra, The Royal Shakespeare Company, The Academy of St. Martin in the Fields Orchestra, and Wynton Marsalis. He has served as creative director for major corporate events. Currently, Ted lives in Paris with his partner. Holy Hell is his first book.

I thoroughly enjoyed this well-written, page-turning, vivid, story and its humor. It contains a wonderful look-see of growing up in the 40s and 50s that will evoke lots of memories and emotions. To anyone who “has been there done that” in regards to the religious life, may appreciate the struggle, angst, and the search for meaning. Anyone who has not will find the same, especially in these troubling, confusing and uncertain times. It calls to mind the kind of chronic depression or sadness that wears away joy in life. I find that it describes the kind of gloom I feel as we head into this 2012 election. Yet there is hope and meaning. Like any work of art, it can be viewed and read on multiple levels. It is based on a true experience and personal views and struggles that have universal appeal.

The account of the 1940s RCA Victor combination radio phonograph player impacted me. We had one too; it is still in the family and still works. It played a role in the salvation of my early life. The author describes well the confusion and struggle of family life. I like to think that there is no such thing as a dysfunctional family. All families function, just not in the way some others deem appropriate. Those who live in such dysfunction as defined by others or themselves and who have no other experience to which to relate can only come to the conclusion that this is somehow normal. How can one criticize that? In regards to the matter of religion and sexuality, there is plenty of “grist for the mill.”

So, simply enjoy a good page turning read of a real life experience of a good storyteller’s version of “man’s search for meaning.” Or, delve deeper into the struggle to find sense in that, which does not seem to make sense. Either way, you won’t be disappointed.

I enjoyed every page of Holy Hell. I love books that grab you on the very first page, or in this case, the very first sentence, and hold you until the final word. Plot alone propels many stories with little else for the reader to think about other than what will happen next. Holy Hell contains much more, and presents a feast of things to think about and reflect upon. It does this by taking you on a multi-layered odyssey seen through the eyes, mind, and heart of young Tom Larsen, its protagonist and narrator. I immediately felt myself bonding with Tom whose completely natural and candid speech makes you feel like you've known him for years. He holds nothing back, and invites you to sit beside him and experience the roller coaster highs and lows of his childhood. I have encountered no author who can so perfectly describe the inner world of a preschooler's mind. Lorenz takes the reader inside Tom Larsen's four-year old head and lets him see with his eyes and hear with his ears the puzzling, contradictory, and often frightening world of his family life. With laser-like accuracy he describes the simple, yet totally logical thoughts and feelings of a precocious child trapped in an abusive environment.

When Tom begins Catholic grammar school, Sister Ethel Rita starts him on the classical religious indoctrination which has remained basically unchanged for generations. His perceptive and often humorous comments about these lessons are priceless. Holy Hell's subtitle is "A Catholic Boy's Story," and anyone who has attended these schools will identify with the accurate portrayal of religion class with the nuns. Tom learns about the devil, sin, and the terrible, fiery torments of hell. It is against this backdrop of sin and damnation that Tom's greatest crisis emerges when, as puberty arrives, he realizes he is gay. Eventually he seeks salvation by joining a religious order and entering a seminary boarding school splendidly isolated from the rest of the world in the foothills of the Ozarks. The title is appropriate because the very thing Tom Larsen hopes will save him, the religious life, turns out to be his greatest torment.

The story of how he goes from the cloistered, sterile, silent halls of a monastery to the crowded, chaotic, dangerous halls of a ghetto high school is fascinating. How he finally calms the inner turmoil and conflict that tortures him is surprising and uplifting. And always along the way, you are treated to the perceptive and thoroughly interesting workings of Larsen's first-rate mind. Holy Hell is the best book I've read in recent memory.

You have subscribed to alerts for Ted Lorenz.

You have been added to Ted Lorenz's favorite list.

You can also sign-up to receive email notifications whenever Ted Lorenz releases a new book.