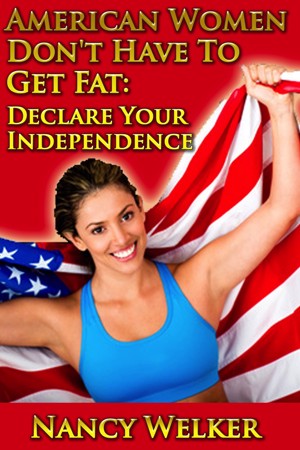 American Women Don't Have To Get Fat: Declare Your Independence

By Nancy Welker
A unique approach to fitness created especially for American women who have had little or no success following diet programs.

eBook updated January, 2016 More
Nancy Welker is a fitness and nutrition professional who has put together a combination of her education, experience and advice for maintaining a trim, toned body without the need of a specific diet program.

Instead, Nancy writes about how to make changes to your everyday habits that enable you to reach a healthy weight, have a stronger body, and gain the confidence you need to reach all of your goals.

This book is for every American woman who has ever felt disappointed by her fitness level, and is frustrated by the type of diets she has attempted to follow in the past.

Fiction : Romantic Paranormal Series "CounterClockwise - A blast from the past love story." This is a growing series started in February, 2016. There is a corresponding website as well.

"American Women Don't Have To Get Fat: Declare Your Independence"

Nancy has spent the last 23 years homeschooling a severely autistic son, and is now making the career changes she was not able to make before.

Nancy is an actress and a model, signing with an agency in the Summer of 2015 and enjoying getting into these fields. She has earned roles in the HBO series "Ballers" and in a web series produced by "ComedyFlo"

Nancy's paranormal romance series, "CounterClockwise" is based on dreams she has actually had since the age of 10, and up until 2014 was very reluctant to discuss them. Within herself she rationalized them away. Events occurred though that brought her to see the truth in her dreams and believe in reincarnation as a Christian woman.

She's a Master Trainer with a diploma in Fitness & Nutrition, and a total of six certifications in fitness modalities such as yoga, aerobics, pilates, and sports nutrition.

As of 2016 Nancy is continuing her Spanish language studies, playing the cello, using her inversion table and is a beginner martial arts student and horseback rider. Nancy has also began target shooting in 2016.

You have subscribed to alerts for Nancy Welker.

You have been added to Nancy Welker's favorite list.

You can also sign-up to receive email notifications whenever Nancy Welker releases a new book.