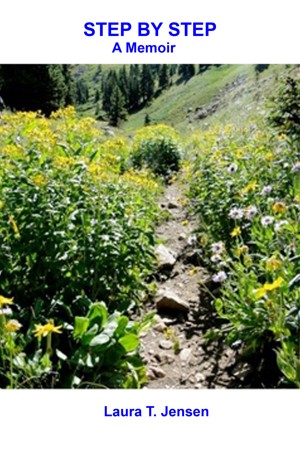 By Laura T. Jensen
Step By Step is a memoir. A collection of short creative non-fiction pieces, which represent segments of my life. They are recollections of people, places and events; some big, some small, some happy, some sad. These stories richly reflect the times and, of course, me and my friends and family.

Laura lived her early life in Bergen County, New Jersey. She attended public schools in both Bergenfield and Westwood and graduated from Westwood High School. A graduate of Lasell College (2011 recipient of the Lasell Medallion and member, Board of Overseers), Laura spent eighteen years in the human resources and training departments of a large organization in New York City. Until recently, Laura and her husband (Jack Hyer) ran a boutique executive search firm specializing in positions in non-profit organizations.

Review
John Keith reviewed on Aug. 31, 2012
(no rating)
Laura Jensen transforms both dramatic moments and ordinary events of life with extraordinary prose to reveal depths and crannies of true humanity. I found myself thinking about what had happened in my own life, often with people and in situations that had been long forgotten, as I read "Step by Step." Many readers and all writers would profit from perusing her delightful creative non-fiction.

You have subscribed to alerts for Laura T. Jensen.

You have been added to Laura T. Jensen's favorite list.

You can also sign-up to receive email notifications whenever Laura T. Jensen releases a new book.