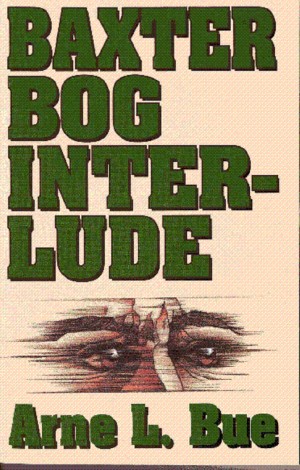 Arne Bue is a lifelong Alaskan, living in Anchorage, Alaska, with his wife, Shirley Bue, the author of Humble Snyder.
Arne Bue is the author of The Lid, Baxter Bog Interlude, Night of the Tustumena and Banto Carbon and the Prehistoric Proboscis.
http://home.gci.net/~bue/index.html

Review
Baxter Bog Cards & Collectibles reviewed on June 2, 2009
(no rating)
Jan O'Meara, Homer News, June 9, 1994, said: "Baxter Bog Interlude starts right out with a scene guaranteed to pull the reader forward: a lone walker is attacked by a crazed moose, and a body of a man with a bullet hole in his forehead and an empty brain cavity is found. What caused the moose's aberrant behavior, who killed the man and why, and what happened to the brains are the mysteries to be resolved ... Bue's real strength is in his storytelling, so it's no surprise that he writes good, suspenseful action scenes that keep his plot moving and the reader engaged. His chase and hide scenes are tense."
San Francisco Bay Area radio personality Ann Arbor read "Baxter Bog Interlude" on the air during January and February, 1996 and interviewed the author live on February 7 as part of her popular radio program "Unbedtime Stories."
Norma Goodman, The Norma Goodman Show, CBS, KTVA Channel 11, November 1995, said during a live TV interview of Arne L. Bue: "... an Extremely interesting book..."
Don Pacis, book reviewer, Philippine News, San Francisco, Nov. 15, 1994 said: "To the new generation of environmental writers, add the name of Arne Bue ... a book that explores the mixed-up world of technology and how it fouls up one of the last pristine parts of the world ... by its very subject it links itself to a bigger movement against those who would despoil what's left of the natural world ...[Bue's] work is a moral response to the horrors of modern technology ...The writing is ... direct, often tense and taut. The plot ... overlaps and leads to an often meticulous ... piece of detective work."
Debbie Briscoe, Chugiak-Eagle River Alaska Star, August 13, 1994, said: "Those reading "Baxter Bog Interlude" get more than n Anchorage/Wasilla-based thriller. They get a glimpse into the subconscious mind of author Arne L. Bue of Anchorage .... "Baxter Bog Interlude" is the product of internal and external occurrences in his life at the time he was writing the novel."
Ted Leonard, author, "Neath the Midnight Sun," columnist, North Pole Independent, March 3, 1995, said: "Baxter Bog, a well loved swamp near Anchorage, is the setting for a gripping thriller, "Baxter Bog Interlude." Once I picked up this fast-moving mystery/adventure, I couldn't put it down until I finished it. This novel is a good read."

You have subscribed to alerts for Arne L. Bue.

You have been added to Arne L. Bue's favorite list.

You can also sign-up to receive email notifications whenever Arne L. Bue releases a new book.