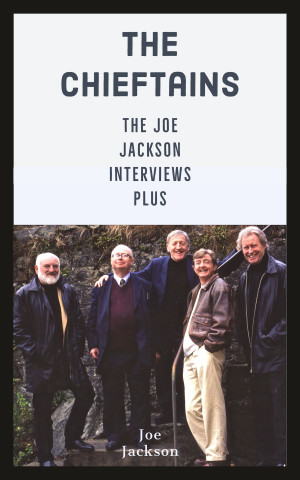 The Chieftains: The Joe Jackson Interviews Plus

"On November 22nd 1991, while working as an interviewer for The Irish Times and an Irish rock magazine, I decided to go to war for the Chieftains because, like its leader Paddy Moloney, I thought his group was needlessly knocked into the media shadows in Ireland by the market dominance of U2." More
'Joe Jackson on: The Chieftains: The Joe Jackson Interviews Plus.

"As I say, in the preface of this book, On November 22nd 1991, while working as an interviewer for The Irish Times and an Irish rock magazine, I decided to go to war for the Chieftains because, like its leader Paddy Moloney, I thought his group was needlessly knocked into the media shadows in Ireland by the market dominance of U2. 21 years later I am still fighting that war in order to try, in my own small way, to ensure that the Chieftains get their due as one of the greatest groups in the world. And later in 2012, I shall fight this war again in The Chieftains: The Joe Jackson Interviews Plus Volume 2."

Joe Jackson is an Irish author, journalist and broadcaster. He has worked closely with The Chieftains, written more than twenty articles which have been published worldwide, sleeve notes for the group's DVD's and a tribute for the programme when Paddy Moloney received and Ivor Novello award. He also attended the Grammy Awards with the Chieftains and a recording session with the group, Frank Zappa and Tom Jones. Jackson's books include Other Voices, A Personal History of Folk Music, co-written with Nanci Griffith, Troubadours and Troublemakers (Ireland Now: A Culture Reclaimed), David Norris: Trial By Media and Gabriel Byrne: The Joe Jackson Interviews Plus.

In The Chieftains: The Joe Jackson Interviews Plus, Jackson publishes for the first time the full, unexpurgated interviews which were conducted from 1991-1999. These were done to help promote seminal Chieftains albums such as The Bells of Dublin, Another Country, The Long Black Veil and Tears of Stone. This book also includes interviews with Frank Zappa, Tom Jones, Joni Mitchell, Mary Chapin-Carpenter, Bonnie Raitt, Joan Osbourne, Heather Rankin, Natalie McMaster and Akiko Yano,

Please note that The Joe Jackson Interviews Plus is a series of booklets which are described by their author as "similar to the Amazon concept of 'Singles' in that they are texts that range in length from 5,000 words to 30,000 and are not full length books." The Chieftains booklet is 25, 000 words.
Available ebook formats: epub mobi pdf rtf lrf pdb txt html
First 20% Sample: epub mobi (Kindle) lrf more Online Reader
pdb
Price: $3.99 USD
Buy Add to Library Give as a Gift
How gifting works
Create Widget
Tags: ireland world music u2 frank zappa irish culture irish music joe jackson the chieftains
About Joe Jackson

Joe Jackson, June 18th 2012,that pic of me is memory of a wonderful moment last Saturday, Bloomsday. Along with 110 other Irish writers I took part in a 28 hour reading session at the Irish Writer's Centre where we all attempted to break the Guinness Book of Records world record for public reading and did! I was thrilled.

I'm probably best known as an interviewer who has published five books and had my articles included in newspapers and magazines all over the world, from The Irish Times - I was their music interviewer for a decade - to Playboy and Rolling Stone. But I'm a writer! I decided at nine years old to become a journalist, when I saw a movie called Deadline Midnight, starring Jack Webb, that made journalism seem like a knightly quest. But when I was 20 my dad told me one night that he was abandoning his secret dream of "becoming a literary creator"and, in a knightly fashion, I picked up the gauntlet and decided to become both a journalist and literary creator. What a stupid thing to do, right?

But I can be stupid in ways,and after years of working on plays, poetry, memoir, and even giving readings of my own poetry, I moved into music journalism in 1985, with an Irish magazine that sadly now I'd rather not name. By 1988 The Irish Times was saying that magazine was "noted for its probing interviews conducted by" little old me. I loved interviewing right away, it helped me bring together my passion for literature, psychology, and even poetry, in ways. Then I did a degree in Popular Culture and started to apply also a socio-political microscope to people I interviewed and it all became even more fun.

I mean that seriously, folks. At the time, during the height of the Troubles in Northern Ireland, I was interviewing, or rather "grilling" terrorists, politicians, even a Taoiseach and two future presidents of Ireland.

So, now, I've drawn back from interviewing and with my new series of self-published book, The Joe Jackson Interviews Plus, I am making available the original, unexpurgated typescripts, plus the Back Story of my experience with each interviewee, and drawing heavily on diaries I kept at the time. I'm also exploring the option of making my more than 1,000 interviews available as MP3's and/or CD's.

I do hope I sell a few copies and can continue creating what will be my real legacy, as opposed to the versions of my work that are sold without my permission elsewhere and too often bastardised version of my writings, sadly!

If you read this far, I thank you for that! You must be a sucker for punishment! 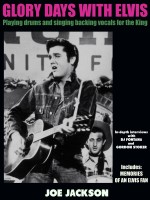 Reviews of The Chieftains: The Joe Jackson Interviews Plus by Joe Jackson

You have subscribed to alerts for Joe Jackson.

You have been added to Joe Jackson's favorite list.

You can also sign-up to receive email notifications whenever Joe Jackson releases a new book.