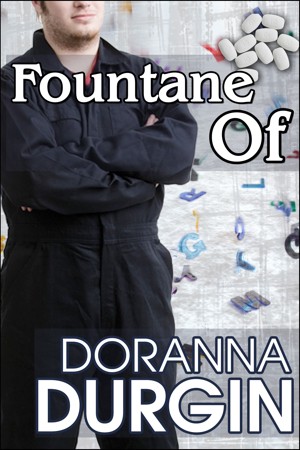 By Doranna Durgin
Rated 4.67/5 based on 3 reviews
Short and edgy, the classic SF "What if..?" An everyman "Joe the Plumber" risks everything in an attempt to prove the establishment wrong and achieve his dreams his own way... In the tradition of Frederic Brown.

"Fountane Of" was first published in HelixSF, edited by William Sanders.

Doranna Durgin is an award-winning author (the Compton Crook for Best First SF/F/H novel) whose quirky spirit has led to an extensive and eclectic publishing journey across genres, publishers, and publishing lines. Beyond that, she hangs around outside her Southwest mountain home with a Lipizzan gelding and highly accomplished competition dogs. She doesn't believe in mastering the beast within, but in channeling its power--for good or bad has yet to be decided! She says, “My books are SF/F, mystery, paranormal romance, & romantic suspense. My world is the Southwest, and my dogs are Beagles!”

Doranna’s most recent releases encompass the three books of the Reckoners trilogy--a powerful ghostbuster raised by a spirit, her brilliantly eccentric backup team, a cat who isn't a cat, and a fiercely driven bounty hunter from a different dimension who brings them together when worlds collide.

Along with a growing numer of originals, these Smashwords editions are author presentations of favorites once found on bookstore shelves.

This was different from Durgin's usual stuff. No animals, and kind of dark. Maybe darkly humorous?

Augie was not a sympathetic character. To me, he seemed to be the sort who grasped at “get rich quick” schemes and thought himself clever for doing so. He didn't bother to get the LitEd (reading) education that his workplace offered because he didn't feel it was necessary. Also, he resented those who were educated and didn't want to become like them – he didn't realize it, but he judged educated people just as much as he believed they judged him.

The ending was clever and tied in several things that had previously been mentioned – even the story's title served as a clue. If I had to name one complaint about the story, it would probably be that what the pills truly did was kind of...silly? That's probably not the best word for it. These pills were supposed to be future tech, but they did something that people could easily do right now if it weren't for the politics and ethical concerns. The future tech...wasn't.

Anyway, I thought Durgin did well with the short story format and wasn't left feeling that Fountane Of should have been longer.

(reviewed 12 months after purchase)
Carol reviewed on June 7, 2013
(no rating)
Very short. The plot is a thread without any depth as might be expected from the length. OK but doesn't grab me. I can see how the edginess would appeal to people who appreciate it.

Not her usual thing, but still very good.

Exactly like the description says -- "short and edgy." Well worth reading.

You have subscribed to alerts for Doranna Durgin.

You have been added to Doranna Durgin's favorite list.

You can also sign-up to receive email notifications whenever Doranna Durgin releases a new book.