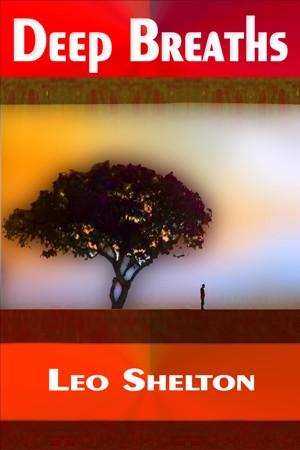 By Leo Shelton
Writing with a deep fascination of life and his life beats, love and living in a way that begs us to also breathe deeply, in this next offering of poetry, we breathe in sync with those things that touch Leo’s Shelton’s life, and in turn, touch ours as well. He’s the 2008 winner of the IPPY Award for his first book of poetry, RHYTHMS – Poetry and Muse.
Available ebook formats: epub mobi pdf rtf lrf pdb txt html
First 25% Sample: epub mobi (Kindle) lrf more Online Reader
pdb
Price: $5.97 USD
Buy Add to Library Give as a Gift
How gifting works
Create Widget
Tags: love life observances life beats explorations
About Leo Shelton

Leo Shelton is a writer, author, poet, educator, scholar, and a self-proclaimed life long learner and student of life. He credits his mom (Carolyn – “Tug”) as the most influential connection and influence on his creative foundation. Growing up in Nashville, Tennessee, he began to journal, write short stories and poetry at the very early age of 10 years old. It was there, surrounding his emotional development, through the exposure to such substantive and creative arts of Fisk University, his mother and god-mother’s alma mater, and Tennessee State University, his father’s alma mater, that his first interests in the arts took anchor, through such influences as the Jubilee Singers and local playwrights and visual arts. He entered a couple of local and national poetry writing contests, and actually won a couple of awards. This solidified the quest to one day write and publish.

Often labeled as a renaissance, he cautiously credits influences of such legends as Maya Angelou, James Baldwin, Nikki Giovanni, Langston Hughes and Marlon Riggs as having a major impact on his desire and creative expression, because “as powerful as those influences are, music, politics, love, life and so much of my culture, development and exposure, I think, also influences from where the words flow.” He additionally credits such influences as Robert Hayden, Richard Wright, Walt Whitman, and Paul Laurence Dunbar as big ones as well. Asked what or who he is reading or following these days, he comments, “Common, and Mos Def and Floetry are all doing their thing in a way that is bringing poetry to the forefronts, through music and song that is so impressive.” He’s also a huge fan of Terrance Hayes and his work. “And one of my personal favorites is the unbelievably talented, Tim’m West – he and his work are incredibly intoxicating.” With such a respect for the legends and a connection to the new – it’s no wonder this up and coming artists is already being labeled a renaissance force.

He’s the author of RHYTHMS – Poetry and Muse, Soul-Full – Poetry, and MBG – Men Who are Black and Happen to be Gay. His work has appeared in Essence Magazine, on DivineCaroline.com, and on GBMNews.com, and he was the first place, Gold Medalist winner of the 2008 Independent Publisher Book Award (IPPY) in poetry for RHYTHMS. In addition to this award, Leo’s RHYTHMS – Poetry and Muse, and MBG, were also finalists in the 2008 Next Generation Indie Books Awards.

You have subscribed to alerts for Leo Shelton.

You have been added to Leo Shelton's favorite list.

You can also sign-up to receive email notifications whenever Leo Shelton releases a new book.