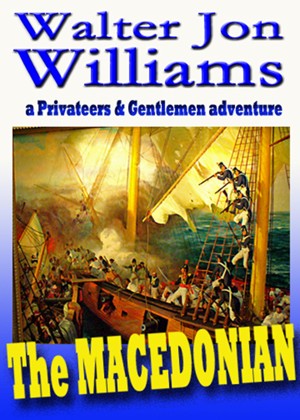 Walter Jon Williams is the award-winning, New York Times bestselling author of Hardwired, Voice of the Whirlwind, Deep State, and This Is Not a Game. 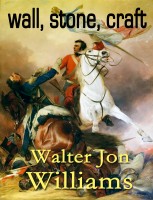 Reviews of The Macedonian (Privateers & Gentlemen) by Walter Jon Williams

"The Macedonian" continues the story of Captain Favian Markham, USN, that began in Walter Jon Williams' "Brig of War". Things pick up pretty much were they left off in the previous book. (Though you need not have read it to enjoy "The Macedonian".) The war of 1812 continues. While awaiting his next command, Markham becomes involved in chasing down a spy ring that has been signaling the British blockade fleet. Then when a fortuitous storm gives an opportunity to break the blockade, Markham basically steals the frigate Macedonian and heads out to do battle with the British in the Atlantic. (Well, actually, he takes command of the Macedonian under somewhat shaky orders from a senior captain—there being no time to communicate with Navy headquarters.) From that point there is lots of action involving deep water sailing and naval combat. Walter Jon Williams obviously did a lot of research for this book and it shows in his very vivid descriptions of what it was like on an American naval vessel in the early 1800's.
This is a very good book. Recommended for fans of Patrick O'Brian and C.S. Forester.

You have subscribed to Smashwords Alerts new release notifications for Walter Jon Williams.

You have been added to Walter Jon Williams's favorite list.

You can also sign-up to receive email notifications whenever Walter Jon Williams releases a new book.