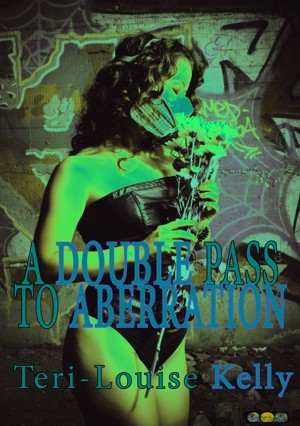 Double Pass to Aberration, A

The dark side of this genre and gender bending author has long been known. But here, in A Double Pass to Aberration we witness Kelly toying playfully with vampires and zombies in alternative ways in two humour-laced genre and gender-bending tales.
.
In the first tale, The Mortician’s Kiss, Kelly adheres to the traditional Stoker formula of old houses, disease, wily cannibal doctors and blood-sucking countesses but throws in lesbianism as inducement. In the second, Standing on a Bridge with Richey Edwards, Kelly leaps into the present, the present of council estate tedium, pop culture and ridiculousness; juxtaposing the reincarnation of the Manic Street Preacher’s suicided lead singer with bathtub existence and life on the dole.

Both different, both enchanting, Kelly’s mind warp continues to expand along a bent curvature.

Try her and see for yourself: push the door, begin; after all, the first step is not the hardest, the last is.

“In other times in other places there were always writers. Writers fill a need, although, quite what that need actually is has never been fully determined. Mainly, writing is just a bunch of words on a page, or as it is now – on a screen. There are hundreds of thousands of words and all bar about six hundred or so are absolutely useless, which is why I don’t use them.”

You have subscribed to alerts for Teri-Louise Kelly.

You have been added to Teri-Louise Kelly's favorite list.

You can also sign-up to receive email notifications whenever Teri-Louise Kelly releases a new book.