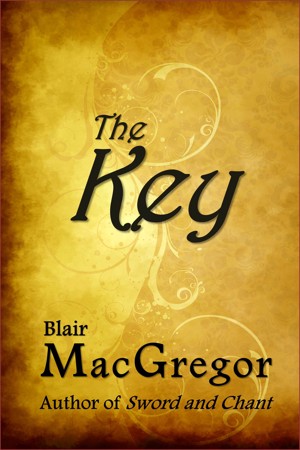 By Blair MacGregor
For Benjas, a mercenary mage, finding the next Key to rule the Shendow Islands is an important contract with great consequences. For Cassandra, a fanatical warrior, it's the quest of a zealot. Secrets and fears pile up between them until success becomes more dangerous than failure, and only the Key can separate victors from victims.

Her short fiction has appeared in Cicada and Writers of the Future. She is a graduate of Viable Paradise and a member of SFWA.

She also teaches and speaks on a variety of topics—martial arts, education, wellness, failure and resilience—for audiences ranging from a couple dozen to a few thousand. Most evenings, you can find her teaching karate at her local dojo. In between all that, Blair hikes and camps, grows organic produce, and indulges in the occasional ziplining excursion. She loves traveling to places both wild and domesticated. She currently lives in rural Indiana with her one son and two goofy dogs.

You have subscribed to alerts for Blair MacGregor.

You have been added to Blair MacGregor's favorite list.

You can also sign-up to receive email notifications whenever Blair MacGregor releases a new book.