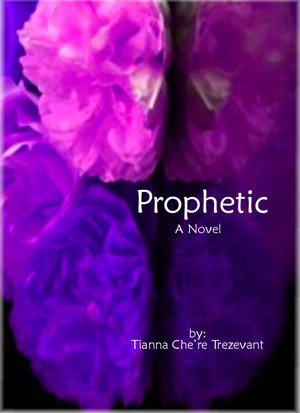 By Tianna Trezevant
Twins birth with a gift so great that it's not mentioned in the Bible but is the very essence of the Word of God. Vanessa and Rebecca both were born with the gift of Imparation, one in the spiritually realm and the other in the natural. What is the gift of Imparation? This story takes a spin on the basic function on why we go to church. To be imparted to, but what if there's more? More
Before the church understood, Robyn was singing in the spirit. She had revelation inside of her and her heartbeat, Nathaniel, was the manifestation in her music. Revelation speaks, manifestation reveals, but impartation, where is that in the Word?
Separated around the age of six, Rebecca’s life in the foster care system was trouble-free, her twin sister Vanessa, however wasn’t. The one thing Vanessa had going for her was, she discovered that whatever she spoke, happened. Rebecca however didn’t need to speak a word.
Teufel knew if he was going to stop the prophetic he had to stop the stop the parents from birthing forth a righteous seed. Since that didn’t work, he now had to stop the seed. Vanessa however was a little more devious than he thought and he only had seven days to get her to gain her sister’s trust. The problem, even he didn’t know the truth.
Seven days to the greatest discovery in God that was there from the very beginning; eight days before impartation. Prophetic is the second book in the Track Series written by Tianna C. Trezevant. If you enjoyed “Kahlir,” this one will make you sit back and wonder, ‘what else God, what else?’

Some gifts are developed though hardship. Tianna first began to write after the death of her mother. Her first published piece came through the local church. With the excitement of seeing her words in print, it birthed forth something she never expected. Prophetically, she was told that God was going to use her hands; she had no idea that it would be in this manner. After having the experience of someone receiving Christ, through something that God gave her to pen, He revealed to her, “that laying on of hands, isn't necessary in the touch, you can touch in your writing.” Tianna has written for the Church of God in Christ, and New Hope Full Gospel Baptist Church in Albuquerque, New Mexico. Established Life Word Ministry and Impact Church, in Charlotte, North Carolina. She is currently a member of Reaching All the World Ministries International in Matthews, NC. She has written a two novels, Kahlir and Prophetic and her third, soon to be released, HIMSELF.

You have subscribed to alerts for Tianna Trezevant.

You have been added to Tianna Trezevant's favorite list.

You can also sign-up to receive email notifications whenever Tianna Trezevant releases a new book.