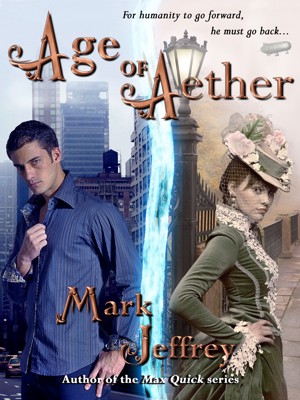 By Mark Jeffrey
Rated 4.00/5 based on 1 reviews
Age of Aether -- A Steampunk Adventure-Romance Novella.

When Captain Benjamin Bantam is tapped to go back in time in order to retrieve a cure for the vicious Shadow plague, he is shocked to arrive in an alternate 1944 where electricity doesn't exist. More
Age of Aether -- A Steampunk Adventure-Romance Novella.

When Captain Benjamin Bantam is tapped to go back in time in order to retrieve a cure for the vicious Shadow plague, he is shocked to arrive in an alternate 1944 where electricity doesn't exist. Instead, a parallel past has mysteriously arisen -- complete with parasols, stunningly luxurious Aerotels, hydrologic computing, Helux-powered 'cloud growlers' and a space elevator-based moon race with Germany. And of course, there is the lovely Dr. Rachelle Archenstone ...

But when Hitler is made Chancellor in this world and the American space program sabotaged, Bantam is the only one who realizes the true depth of the danger posed by the newly-formed Nazi party. Together with Rachelle, he races to save this America while seeking an explanation to the mystery of this alternate past -- and with it, a way to return to his own world with the Shadow's cure. But when it comes down to a choice between his lovely Rachelle and a thousand years of Nazi rule, what will he do?

Thrill to a tale of a Yesterday that never was ... And yet was!

Mark Jeffrey is a serial technology entrepreneur and author. He has co-founded four internet companies and written four novels. He is the author of MAX QUICK: THE POCKET AND THE PENDANT (Harper Collins, 2011), MAX QUICK: THE TWO TRAVELERS (2012), and AGE OF AETHER (2012) in addition to ARMAND PTOLEMY AND THE GOLDEN ALEPH.

From 2007 to 2010, Mark was the founding CTO of Mahalo.com, Inc., a human-powered search and learning site backed by Sequoia Capital, CBS, News Corp, Elon Musk and others. Prior to this, Jeffrey co-founded a business social networking company ZeroDegrees, Inc. in 2002 and sold it to IAC/InteractiveCorp in 2004 with more than one million registered users.

His first company, The Palace, Inc., was backed by Time Warner, Intel and Softbank and sold to Communities.com in 1998. The Palace was a popular avatar virtual world environment which had 10 million users at its peak. He was also the co-founder and CEO of SuperSig, Inc. in 1999, which focused on app-like functionality embedded in email.

His first novel, MAX QUICK: THE POCKET AND THE PENDANT, was published in hardcover and ebook by HarperCollins in May, 2011. The book was initially podcast as a series of episodic mp3's and received over 2.5 million downloads.

Mark Jeffrey holds a BS in Computer Science from the University of New Hampshire. 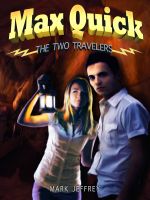 A wonder full story. I like the way the author created a whole new world, a “what if world”, that is. With it's own culture and new words that give it a unique flavour. The book felt more of a chronicle then a stand alone.
I also like how the other explain things. So we didn't have to ask in the end anything except wonder why it was just one book.

You have subscribed to alerts for Mark Jeffrey.

You have been added to Mark Jeffrey's favorite list.

You can also sign-up to receive email notifications whenever Mark Jeffrey releases a new book.