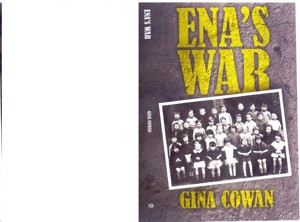 By GINA COWAN
An amusing story of a little girl and her family in unusual times. Everyday life in a Scottish city is revealed as an ordinary working-class family come to life in this memoir. This will appeal to ex-pats all round the world as well as to more local readers. More
What was it like to be child in wartime Glasgow?
This book gives a personal view of the conditions of that time. Many older readers will identify with Ena and recall their own memories of those times. Younger readers will be transported to a time before TVs, laptops, nintendos and mobile phones.
Although this is no text book, it could be used as part of a project on WW2 in schools.
Find out more about street games, evacuation, diphtheria and literal nit-picking. This is not a ‘misery’ book. In spite of restrictions and poverty, Ena had a very happy childhood. The incident of the ‘Clootie Dumpling’ reveals the astonishing outcome when a food parcel arrives from Australia with unexpected contents.
How did Ena deal with bullying?
How did Ena and her brother lose Mum’s last half-crown?
How did children use substitutes for rationed sweets? They used cocoa powder dipped in sugar, cinnamon sticks and hard liquorice sticks from the chemists to make sugarolly water and sticks of rhubarb sweetened with a tiny drop of sugar.
Ena had diphtheria and was removed to a fever hospital. Through her eyes we see the strange environment she entered and the frightening events she had to endure, while isolation meant no visitors for six weeks. Some of these events are hilarious when viewed from an adult point of view.
Read of Ena’s play acting as ‘Christopher Robin’ and an organ grinder’s monkey in Girls’ Guildry displays. Find out about her unexpected introduction to the countryside where she couldn’t distinguish between cows and bulls and how she came to be travelling, without adult supervision, in the guard’s van of a train with two other children on an exciting adventure.

Gina Cowan lives in Lanarkshire Scotland and has three grown-up children and four grandchildren. She was born and brought up in Glasgow and this book is about her memories of that time. She was known then as Ena and was the youngest of three children.
When her own family became more independent she graduated as a mature student and taught for twenty years as a primary school teacher. On retiring she pursued her interest in local history and, in time, became President of the Monklands Heritage Society. She helped to initiate an annual magazine for the Society. This has been in operation for fifteen years and she has been its editor for the last six years. She has had many articles published and does a monthly book review for another magazine.
Last year she became a member of the Learning in Later Life student association at Strathclyde University and took classes in ‘Creative Writing’, ‘Communicating Online’ and ‘Web Design’. She was then able to design a web site for the society. She has experience of public speaking and has an interest in genealogy and tracing her family tree. She enjoys going on bus tours both in the UK and in Europe and writes up these adventures, illustrating them with photographs. She stays active by attending Keep Fit classes twice a week. She is co-author of a published book on church history and is now involved in writing a humorous book on her experiences as a teacher.

You have subscribed to alerts for GINA COWAN.

You have been added to GINA COWAN's favorite list.

You can also sign-up to receive email notifications whenever GINA COWAN releases a new book.