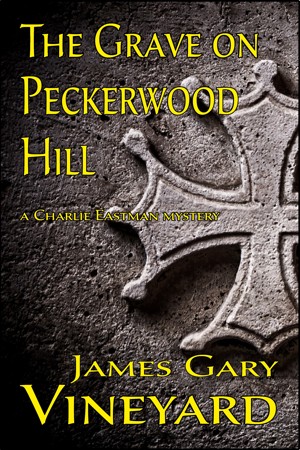 The Grave on Peckerwood Hill

By James Vineyard
Charlie Eastman, whom everyone repeatedly mistakes for a Texas Ranger, searches for an elderly woman's brother whom she hasn't seen for 70 years. The case pairs him with Doc Page, the fiery redhead who is also the town doctor. Together they discover Nazi plunder, solve a series of murders, and reveal the identity of the man responsible for it all. Authentic Texas mystery, dialect and humor. More
Charlie Eastman, whom everyone repeatedly mistakes for a Texas Ranger, is the protagonist in this fast-paced, contemporary authentic Texas mystery. Set in West Texas today, The Grave On Peckerwood Hill is chock full of authentic dialect, historically accurate facts and geography, and natural humor. The story begins with two teenage boys from drastically different backgrounds sneaking out of their homes after midnight during an ice storm and unwittingly videoing their own murders. Lacking clues, a sheriff begs the help of Charlie Eastman, a retired corruption investigator for the governor’s office. Eastman declines, citing a recent mental breakdown. Unfortunately, Eastman has an auto accident that traumatizes Austin Blackie, a champion stud bull owned by the wealthy widow of Red Pirtle, a simple plumber who launched the do-it-yourself store craze in the fifties. After convincing Eastman that he rendered the bull impotent—“His pecker’s broke,” she tells him—the old woman and a mysterious tattoo artist scam Eastman into searching for her brother, whom she hasn’t seen for seventy years. The case partners Eastman with Doc Page, the red-haired town doctor whose terrible, swift tongue and smell of Noxzema cleansing cream drives him wild. A statue of three enormous peanuts on the town square that locals call Gooberhenge and a one-eared donkey that's mistaken for a unicorn lead Eastman, Doc, and the tattoo artist to the missing brother, who is protected by Central American mercenaries. During the search, Eastman discovers a strange stash of Nazi-plundered relics, the solution to the river bottom murders, and the man responsible for the New London school explosion that killed hundreds of children.
The Grave On Peckerwood Hill is second cousin to No Country For Old Men, yet it is more than the pursuit of an evil force sporting an eighties haircut. The protagonist, Charlie Eastman, is Harry Potter in mid-life crisis. He’s a magnet for everything he wants to avoid. The story is as multifaceted as a Curb Your Enthusiasm episode with a mix of humorous, sociopathic characters. Fans of Elmore Leonard should find it to their liking.
Download: epub mobi (Kindle) pdf more Online Reader
lrf pdb
Price: Free! USD
Add to Library
Create Widget
Tags: texas humor texas ranger contemporary mystery jg vineyard charlie eastman nazi plunder
About James Vineyard

J. G. Vineyard is a fifth-generation Texan. He began a career in law enforcement in the Dallas-Fort Worth area as an investigator in the Criminal Intelligence Division of the Department of Public Safety at DFW Airport. He transferred to the Dallas Organized Crime Task Force (Metro Squad) in 1981 and spent nine years working organized auto theft, burglary rings, armed robbery crews, and illegal drug manufacturing, much of the time in an undercover capacity. From 1990 until 2007, he was assigned to the Drug Enforcement Administration’s (DEA) Dallas Field Division's enforcement group focusing on international smuggling and sophisticated contraband distribution systems. Over the years, he accumulated numerous awards from law enforcement agencies and was an instructor at several area police academies including the Dallas Sheriff’s Department, Dallas Police Department, Regional Police Academy in Arlington, Texas, and DEA’s training programs. During that time, he also taught courses in international smuggling at the American Airlines academy. He holds a Master Peace Officers certificate and is a graduate of DEA’s Drug Unit Commanders Academy in Quantico, Virginia. From the other side of his brain, he has written a full-length comedy stage play called Moby And Dick and a one-act play called Tap The Brakes, Elvis. He is a member of several writing and reading groups.

You have subscribed to alerts for James Vineyard.

You have been added to James Vineyard's favorite list.

You can also sign-up to receive email notifications whenever James Vineyard releases a new book.