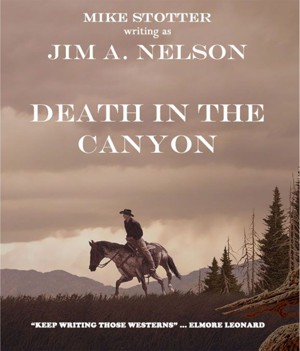 Death in the Canyon

By Mike Stotter
Rated 4.00/5 based on 1 reviews
From the best-selling author of McKINNEY'S REVENGE comes the exciting story of a Montana range war. Lives hang in the balance and hired gunman Will Calhoun is left to stop bloodshed - if he can. More
From Award-winning author, Mike Stotter, comes his first book written under the byline of Jim A. Nelson. In Montana, Big Sky Country, the threat of a ranch war over a new breed of cattle hangs over The Leaning B and the DR ranches. Bloodshed was the last thing on everyone's mind but nevertheless blood is spilt. Hired gunman Will Calhoun soon finds himself elevated to the job of co-owner of The Leaning B, and that's when the real trouble begins. Fists fly and lead kisses the air as the threatened ranch war grows ever closer. Calhoun finds himself the target of death threats from mystery quarters but the question remains: would he and those around him survive the bloody struggle?

"Stotter has a sure hand with characters." - Ed Gorman, Silver Spur winner

Michael (Mike Stotter) was born and educated in London's East End. He now lives with his family in Essex. Mike is an aficionado of the American West. He is the author of several pulp Western novels and has contributed to reference works on the western frontier and western writers. He has contributed to anthologies ranging from science fiction, crime through to the Old West. He is the award-winning author of The Wild West - a reference work for children. For the novel, Death in the Canyon, Mike chose to write it as Jim A Nelson as a tribute to his late parents Jim & Nell (Eleanor) - running it together came out as Jim and Nell's son.

In June 2012 along with his long-time school friend and fellow writer, Ben Bridges, they have finally realized a long-held dream to bring back into 'e-print' some of the most popular and best-loved Western and action-adventure series fiction of the last forty years. Series fiction, the most popular genre was always the Western, but it also encompassed war stories, tales of pillaging Vikings, life in the Roman arena and action-adventure set in the far-flung future, was at its most popular throughout the 1970s and 80s and is still fondly remembered and avidly collected by die-hard fans. Some books are now so hard to come by that it's not unusual for them to change hands for astronomical amounts.
"We got to know a number of the authors when we were teenagers," remembers Mike. "Although they mostly wrote Westerns, they often joked that they had never been further west than Piccadilly, in London's West End."

Thus Piccadilly Publishing was born. One of its aims is to bring back titles for new and old readers alike. Great care is taken over the production of each title, and each one has a specially-commissioned cover from Westworld Designs that recreates the feel of the originals, at the same time giving them a fresh and more modern look.

Mike is also the editor-in-chief of the UK's Number One online ezine devoted to the crime & thriller genre www.shotsmag.co.uk

Death in the Canyon was certainly worth a dollar and was a good read for a short western. There were some very unexpected twists, and some very misleading situations. Some parts did not quite jell for me, but overall it wasn't a bad story. I would probably read it again with interest again in a few years time (the time between re-reads is getting shorter as I get older!).
Colin.

You have subscribed to alerts for Mike Stotter.

You have been added to Mike Stotter's favorite list.

You can also sign-up to receive email notifications whenever Mike Stotter releases a new book.