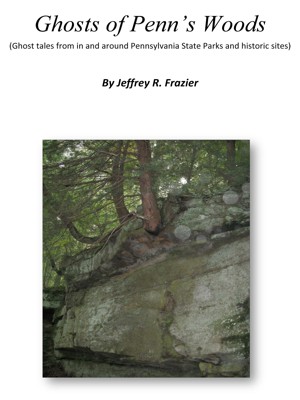 By Jeffrey Frazier
This is a book of ghost tales from in and around Pennsylvania's state parks and historic sites, which are charming and appealing places of natural beauty in their own right. But the fact that they are also home to other-wordly guests should offer an added incentive to those who want to explore some of Pennsylvania's most fascinating natural and supernatural attractions. More
Those who enjoy tales of ghosts and the places they haunt will enjoy this volume of ghostly encounters. Particularly since the charm of the stories included herein is enhanced by the fact that most of them come directly from those who experienced them, rather than from a second-hand source. Moreover, the accounts are centered in and around Pennsylvania’s state parks and historic sites, which in and by themselves offer attractions of their own for lovers of the outdoors and the state’s historical heritage. The fact that these places are also home to other-worldly guests should offer an added incentive to those who want to spend their time exploring some of Pennsylvania’s most fascinating natural and supernatural attractions.
Available ebook formats: epub mobi pdf rtf lrf pdb txt html
First 15% Sample: epub mobi (Kindle) lrf more Online Reader
pdb
Price: $1.99 USD
Buy Add to Library Give as a Gift
How gifting works
Create Widget
Tags: ghosts history supernatural pennsylvania hiking camping state parks
About Jeffrey Frazier

Jeffrey R. Frazier and his wife Helen currently live in Centre Hall, their hometown. Mr. Frazier is author of seven books in a series titled Pennsylvania Fireside Tales. To many folks the title evokes images of an old log cabin sitting somewhere in an isolated and little-settled valley somewhere in the Pennsylvania mountains seventy-five or more years ago. A crackling fire in an ancient stone fireplace makes the interior a cozy place to be on a cold winter’s night, especially in those unhurried days before electricity and automobiles forever changed the times that we now refer to as the “Good Old Days”.

No television, radios or computers to break the monotony of the long evenings in those days. Entertainment then was often provided by an old patriarch sitting in his special chair in front of the fireplace. Surrounded by youngsters anxious to hear tales of the olden days, he would begin to talk about Indians, hunters who trailed the wolf and the mountain lion, ghosts, witches, gypsies, moonshiners, and other characters of the long ago; tales the author describes as the “soul” of these dark and rugged hills that we call home. It is these stories that Mister Frazier preserves in his books.

The author was born and raised in Centre Hall, Centre County, where he says he grew up in a “Tom Sawyer sort of way”. Some of his fondest memories of that boyhood include explorations of out-of-the-way spots in the mountains and accounts of the legends that seem to cling to them. After graduating from Penn State in 1967 and moving out of state, he realized how much he loved the Pennsylvania mountains and their stories. It was this “home-sickness” that inspired him to collect and write the old-time tales. Since that time he has collected those same anecdotes from all over the state, ranging from the Blue Mountains of Berks and Lehigh Counties, the South Mountains of Adams County, the “Black Forest” area of Potter and Tioga Counties, the Alleghenies of Clearfield and Blair Counties, and the other counties in the middle. Many of the stories often sound “far-fetched” to us today, but Mr. Frazier also tries to find the kernels of truth that might be buried in them. In that way he takes on the role of an investigative reporter or detective, treating each tale as a little mystery. It is because of this approach that he chose “Origins and Foundations of Pennsylvania Mountain Folktales, Legends, and Folklore” as the subtitle for his series of books. Written in a format that the average reader can enjoy, the tales take the reader back to a crackling fire in that cabin nestled among the green valleys of Pennsylvania’s legend-shrouded mountains.

He has also, at the urging of his readers, recently published a new book titled “Ghosts of Penns Woods – ghost tales from in and around Pennsylvania state parks and historic sites”. The stories therein should prove particularly appealing to lovers of both the natural and supernatural attractions Pennsylvania has to offer.

Mr. Frazier’s books are published by Egg Hill Publishing Company. They can be purchased directly from the author at 113 Cottontail Lane, Centre Hall, Pa. 16828, or they can be ordered through any local bookstore or online at www.pafiresidetales.com. Mr. Frazier also is available for speaking engagements. His lectures, titled “Pennsylvania Legends and Folktales – Fact or Fancy”, include a slide presentation that enhances the old-time legends and folktales he talks about and which are chosen specifically for the area where he is invited to speak.

You have subscribed to alerts for Jeffrey Frazier.

You have been added to Jeffrey Frazier's favorite list.

You can also sign-up to receive email notifications whenever Jeffrey Frazier releases a new book.