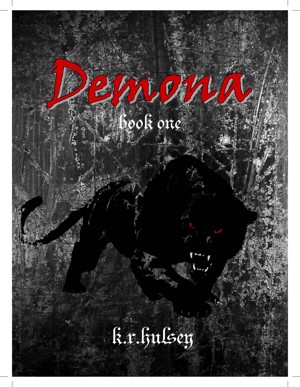 By K.R. Hulsey
Rated 5.00/5 based on 1 review
Demona, a mixed race young woman, born of both good and evil, is the key to Billayo’s salvation. Abused, starved, treated like a wild animal, her journey begins in the cell of a human. She’s given up all hope of rescue, family, love — until the unthinkable happens. She is freed. Released from unendurable slavery, she has the power to save two worlds.

But first she has to learn how to be human. More
There is a world beyond our own whose magic still runs rampant; it runs deeper than the roots of the earth and thicker than the air we breathe. While humans of Earth have forsaken the natural order for technological advancement, Billayo still lives and breathes the magical essence of nature and of the soul. A planet much like our own, with vast seas, awesome mountain ranges, and its own giant sun and moon, Billayo could be the long lost twin of our Earth.

Perhaps eons ago, the worlds had been closer, or travel had been possible, as Earth retains myths and legends of incredible creatures that are of flesh and blood on Billayo. Dragons, fairies, gryphons, shapeshifers, sylphs, all with their own various races and cultures are alive and thriving, including those with their own innate talent that the humans of Earth have forsaken, labeling those with traces of that talent as “witches”.

While humans strangle their world with technology, the Majiki, those with magic in their blood, co-exist with the natural order of Billayo.

No world, however, is perfect.

Even here, prejudices have split the peoples, peace is threatened by the humans and their hatred, and hidden at the edge of the world, an ancient evil watches and waits, compelling those who are easily manipulated. Should the evil become too powerful, it would consume Billayo and move on to other worlds to appease its insatiable appetite.

It would come for Earth.

Demona begins the story of the struggle to save the worlds. A young woman of mixed race, born of both good and evil, contains the key to Billayo’s salvation. Abused, starved, treated like a wild animal, her journey begins in the cell of a human beast. She’s given up all hope of rescue, family, love — until the unthinkable happens. She is freed. Released from unendurable slavery, she has the power to save two worlds.

I have an interesting heritage of Hispanic, Welsh, and Native American, but I was raised to be a strong American woman. Period.

I am a wife, a mother of 3 and I work a part time job. Writing is what I do to stay sane and remind myself that I still deserve ME time.

I started to write after a childhood episode prompted my school to suggest to my mother that I should see a psychiatrist. After a few trips, the man realized I had an overactive imagination, a short attention span, and I was in desperate need of an outlet. He suggested I start creating things with my hands, to use my imagination in my coloring, in my school art projects, even in the way I played.

I didn't write at first, my spelling and grammar is still bad enough to give editors a stroke. Yet, as I got older and the school art projects faded into nothingness, I began to do poetry.

I won't bore you with my difficulties as a child, everyone has them, and I've seen plenty worse. But my writing was pretty dark in the beginning. I started the "Demona" series during my Freshman year in High school, setting it aside and restarting a million times. When I hit college, I was inspired by life and new friends to finally finish book one. I sent it to DAW. Six months later I got a rejection but all I saw was my entire manuscript, stark white and pages completely untouched. I took some gasoline to that copy. I started again and sent it off to TOR. Ditto results. I gave up.

About the time my son was born, six years ago, I was reading a book and couldn't believe that such trash could possibly be published. I looked at the company, and it was DAW. I was disgusted. Even more so when I found out the book was published due to an inside connection -- it said so right on the inside cover. It was a dedication thanking her cousin's friend for his help.

I decided I didn't want the big corporations to publish my book anymore. Sure they had great writers and great books, but why would I want anything to do with big business that you can only break into if you have the right connections? The Mafia had the right connections and look how well that went.

So here I am. I always hope that everyone who reads the story, enjoys it, of course I can't make everyone happy but I can still hope. And frankly, no matter how bad it is, it's a whole lot better than that tripe I paid $15.00 for.

Reviews of Demona - Book One by K.R. Hulsey

Finished book 1...just got better & better as the story developed. Enjoyed preview of book 2 (thank goodness there's a book 2). Will be impatiently waiting for it to be published!

(reviewed the day of purchase)
Vicki Brady reviewed on Oct. 2, 2012
(no rating)
Tried the sample &got hooked immediately so just puchased the book. Great start to story, anxious to see what else happens in this world. Sure hope there will be future books in this world or any other by this writer. Hope book 2 will be out shortly. Excellent writing!

You have subscribed to alerts for K.R. Hulsey.

You have been added to K.R. Hulsey's favorite list.

You can also sign-up to receive email notifications whenever K.R. Hulsey releases a new book.