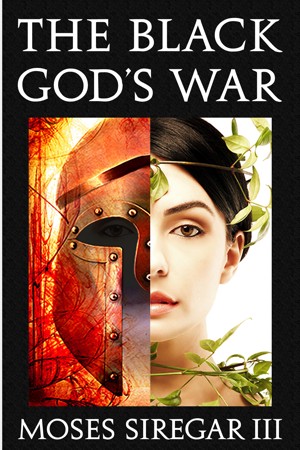 By Moses Siregar III
Rated 4.83/5 based on 6 reviews
Her father-king wants war.
Her messianic brother wants peace.
The black god wants his due.
She suffers all the consequences.

King Vieri is losing his war against the lands of Pawelon. Feeling abandoned by his god, he forces his son Caio, the kingdom’s holy savior, to lead his army. Victory ought to come soon ...

A novella introducing a novel by the same title. The full novel is now available. More
"I enjoyed this novella from its opening chapter to its gripping end ... The writing style ... immediately put me at ease in the setting."
--Red Adept Reviews, 5 Stars

"Siregar's prose is smooth, and for his first novella he has his sense of pacing nailed down ... Siregar's debut is an excellent example of the quality the indie author scene is capable of ... More like this, please."
--Signal dot Noise blog

"If you want to read a talented new author with a flair for storytelling, you should definitely pick up this story."
--Debra L. Martin's Review, Two Ends of the Pen Blog

"'The Black God's War' has all the right ingredients and his prose lives up to the challenge ... It's been a while since a novella so captured me that I read it almost straight through--70 pages in the first sitting. But Siregar's novella, 15 chapters culled from 85 of his upcoming novel, just has that effect on you ... His characters are as passionate as his descriptive prose. The pacing is perfect ... This is a novella epic fantasy fans don't want to miss."
--Bryan Thomas Schmidt's blog
_______

The black god wants his due.

She suffers all the consequences.

King Vieri’s war against the lands of Pawelon rages into its tenth year, and with the kingdom’s holy savior, his son Caio, en route to the fighting in the storied canyon, victory ought to come soon. Feeling abandoned by his god, King Vieri forces young Caio to lead his army to victory.

The Black One, Lord Danato, tortures Lucia with nightly visions promising another ten years of bloodshed. She can no longer tell the difference between the waking world and Danato's nightmares. Lucia knows the black god too well; he entered her bed and dreams when she was ten.

As the epic battles rage, Lucia struggles to understand the messages of The Black One, while Caio wrestles with his conscience: Can someone who only wants to heal the world bring himself to kill another man?
_______

When I was ten, I fell in love with an anime series. It was a space opera spanning three human generations, a saga revealed over 85 consecutive episodes and four months of after-school TV. Watching Robotech was a spiritual experience for me. I still remember how high I felt after watching the 85th episode for the first time. How many pleasures in life are better than a well-executed drama?

Because of that experience, I decided I wanted to be a storyteller when I grew up and hoped I could someday inspire others as that show did for me. As things turned out, I have spent most of my life exploring religious and metaphysical questions, while writing a lot on the side. In recent years, I have decided to get back around to my heart's desire when I was a boy: Telling the big story.

My novel "The Black God's War" is a dramatic epic fantasy, and an homage to Homer with a multicultural flavor. It's an original story in which I also tip my cap to the Greek dramatists of old. My novella-length preview of the novel is currently available, with the full novel planned for release as an e-book and print book in May, 2011. You can follow my blog, "Moses and Dionysus Walk Into a Bar ..." at http://ScienceFictionFantasy.net.

I invite you to read a sample from my epic story and more than anything, I hope you'll enjoy it and feel inspired by it to pursue your own passion.

This book is very well written. The author's talent puts the reader right there into the action and creates a vivid tapestry for the plot. I found the main character Lucia to be engaging and I want to read what follows from this prelude.

A day of wondrous glory, a day of devastating despair. A long-awaited, holy child is born and minutes later his mother dies. Lucia, his 10-year-old sister, is the only one who can see Lord Danato, the god who takes their mother's life. Nothing in Lucia's own life will never be the same again. Haunted by regular visitations from Lord Danato, and living in the shadow of her holy brother, Lucia must find her place in the world. 19 years later, Lucia's father, King Vieri is leading the Rezzia people in war against the Pawelon people. Caio and Lucia have very important roles to play in the future of the Rezzia people, and they wonder if the cause is worth the death toll that will certainly follow.

A novella by Moses Siregar III, the story opens with a scene that pulls you in at once. I was immediately sympathetic to Lucia and very curious about Lord Danato. We are given just enough context to pique our interest and help us understand the people of this time, but we are still left wanting more. This novella consists of 15 of the early chapters of a planned 85 chapter novel (to be released in May 2011), and it's an intriguing taste of what is to come. The characterization in this story is fitting to the length, but I was curious to know more about the main characters. Some characters we get to know a bit better while we are only given a taste of others. The full book promises a more in-depth exploration of some of the characters, particularly the Pawelon people (to whom we are only given a brief introduction). Gaining more perspective on where the Pawelons stand will really help to round out the story and draw us further in.

Well-paced and fluid, the writing style is engaging and descriptive. I really got a feel for the time period and the surroundings. There is more to the story than it seems; I noted religious undertones that brought to mind stories of a biblical nature. I hope the actual novel capitalizes on this as one of its themes without being preachy or blatant. I'm excited to know more about the journey of the Pawelons, as well as hopefully get more backstory on Lucia and what it was like for her and Caio to grow up a part of this legend.

I felt the ending wasn't really satisfying by itself; it left me feeling let down. As a stand-alone novel, I wanted more. As a "teaser" to a full-length novel, it works to prepare you for the rest of the story. Knowing that there will be a book that will take this same story and push it further, while giving me more backstory on the Pawelon people, I'm excited to read more!

A captivating novella introducing the forthcoming book filled with great characters and multiple points of view. Some of the dread filled scenes are very well written and evoke some beautiful yet dreadful imagery. I'm eagerly waiting the finished novel.

A good taste of a bigger tale for all epic fantasy lovers out there.

A compelling tale invoking the despair one feels between what is right for a community versus what is right for an individual, "The Black God's War" is told from a voice well-versed in the depths of empathy. The characters deal with a plague of issues involving the questionable honor of polytheistic missionary work, the downside to altruistic healing work (for others, and themselves), and the difficulty of maintaining pacifism. A great read.

Intriguing, captivating, and at times chilling, this is a story that really draws you in. Beautifully vivid characters and scenes and multiple points of view keeps things very exciting. Can't wait for the full book.

You have subscribed to alerts for Moses Siregar III.

You have been added to Moses Siregar III's favorite list.

You can also sign-up to receive email notifications whenever Moses Siregar III releases a new book.