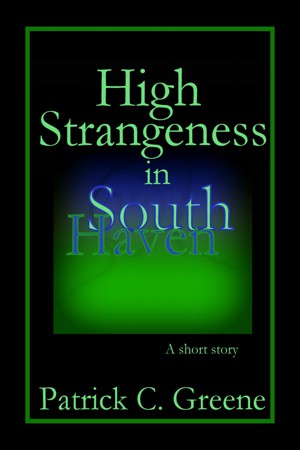 "Ray Ray liked to keep his arms covered beneath a crotch length long-sleeve because of the needle marks, not to mention the little .25 he had taken to carrying in his back pocket, as the paranoia crept deeper by degrees."
Download: epub mobi (Kindle) pdf more Online Reader
rtf lrf pdb txt
Price: Free! USD
Add to Library
Create Widget
Tags: horror short story
About Patrick C. Greene

In addition to his novel PROGENY, and the short story collection DARK DESTINIES, Greene has several film projects in the works, and just finished writing his second novel - THE CRIMSON CALLING -the first in the action-adventure vampire trilogy, The Sanguinarian Council.

Some dark serendipity plopped a young Patrick Greene in front of a series of ever stranger films-and experiences-in his formative years, leading to a unique viewpoint. His odd interests have led to pursuits in film acting, paranormal investigation, martial arts, quantum physics, bizarre folklore and eastern philosophy. These elements flavor his screenplays and fiction works, often leading to strange and unexpected detours designed to keep viewers and readers on their toes. Literary influences range from Poe to Clive Barker to John Keel to a certain best selling Bangorian. Suspense, irony, and outrageously surreal circumstances test the characters who populate his work, taking them and the reader on a grandly bizarre journey into the furthest realms of darkness. The uneasy notion that reality itself is not only relative but indeed elastic- is the hallmark of Greene’s writing. Living in the rural periphery of Asheville North Carolina with his wife, youngest son and an ever-growing army of cats, Greene still trains in martial arts when he’s not giving birth to demons via his pen and keyboard.

You have subscribed to alerts for Patrick C. Greene.

You have been added to Patrick C. Greene's favorite list.

You can also sign-up to receive email notifications whenever Patrick C. Greene releases a new book.